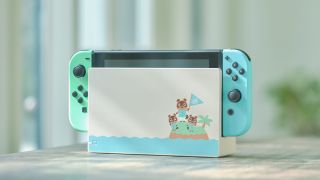 The quaint towns we roam in Animal Crossing games are incredibly charming, but this Switch model's pastel theme and painted dock are downright tasteful - elegant, even. I particularly love details like the white backsides of the Joy-Cons and the villager etchings on the back of the console.

The Animal Crossing New Horizons special edition Switch rolls into town March 13 - one week before New Horizons launches - for the usual retail price of $299.99. The console doesn't include a copy of New Horizons. The press release says pre-orders are set to open at select retailers "soon," although it looks like Best Buy already has it up.

As we're starting to see with the new Animal Crossing Switch Controller, Animal Crossing manga, and now this exceptionally visually appealing special edition console, Animal Crossing isn't just a game, it's a lifestyle. And since that lifestyle mostly revolves around fishing, making friends with all kinds of animals, and picking fruit from trees, you can be guaranteed I'll be trading in my dull, lifeless gray Switch for this conversation piece of a gaming console.