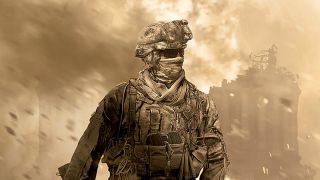 Along with the reveal trailer for Infinite Warfare we now have official confirmation of Modern Warfare Remastered.

That talk of “revamped animation” sounds like we’re getting more than just a basic brush up. Here’s the full spiel and some confirmation of what’s coming with the 10 map multipayer:

"Fans will relive the full, iconic campaign as they’re transported around the globe with Capt. Price, Gaz and Soap across all the missions from the original game, including 'All Ghillied Up,' 'Charlie Don’t Surf,' and 'Crew Expendable.' Players will also experience the online multiplayer mode that redefined Call of Duty by introducing killstreaks, XP, Prestige and more, and battle head-to-head in 10 fan-favorite maps from the original multiplayer mode, including classics such as 'Crash,' 'Backlot' and'Crossfire.'”

It’s not clear yet if you can buy the remaster separately as the only details so far have it bundled with Infinite Warfare:

The buying options there are as follows