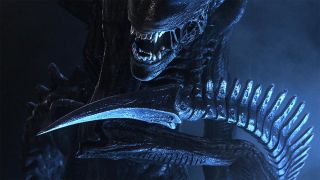 Alien: Covenant looks like a return to dark, scary sci-fi for director Ridley Scott, and if the film’s special effects team is correct, it’s also going to be one of the bloodiest movies of Scott’s lengthy career. IGN UK recently spoke with a few members of the film's crew and learned some intriguing details about the director’s latest trip into space.

1. It’s the "bloodiest film" the crew has ever worked on

The Alien franchise has always been bloody, but when the crew says that this is not only the bloodiest Alien movie, but the bloodiest film they’ve ever worked on, that seems like we’re in for a whole different level of gore. And considering the fact that Creatures Supervisor Conor O’Sullivan worked on Spielberg’s remarkably bloody war epic Saving Private Ryan, this movie isn’t messing around when it comes to blood and guts.

2. "We're trying to make it as realistic as possible"

Special Visual Effects Supervisor Neil Corbould says Scott wants “the shock factor” in this movie and he and his team are “going all out for that.” It’s going to take a lot to shock audiences the way the chestburster scene in the original movie did back in 1979 - especially since we know all of the hallmarks of this franchise by now - but as we saw in the most recent Alien: Covenant trailer, aliens will be bursting from people’s spines this time and I wouldn’t be surprised if there are a few other shocking explosions from random body parts just to keep the audience on our toes.

Actress Katherine Waterston, who plays Daniels, said she’s had some “amazing moments when I’ve walked past my trailer and seen my friend’s head on a stick,” so we’re pretty sure that one or more of the ship’s crew loses their head during the course of the movie. With eggs, chestbursters, facehuggers, xenomorphs, and the all-new neomorphs to contend with, it’s no surprise the humans are largely outmatched. So who do you think ends up headless? I’m thinking Danny McBride’s character. From what we’ve seen of him in the trailers, he doesn’t seem like he’d be especially well-equipped to face off against any of these alien menaces.

Corbould says that Scott “loves to do things in camera,” so his team worked to capture as much of the action on set as possible and not overly rely on post-production techniques. Say what you will about the script for Prometheus, but that movie was visually dazzling and proved Scott was still a master at crafting sleek, memorable, sci-fi images that felt tactile and realistic. I can’t wait to see if Alien: Covenant meets that standard, and hopefully this script is infinitely better than Prometheus’ (which means it’d be...you know, actually good).

Directed by Ridley Scott and starring Katherine Waterston, Michael Fassbender, Noomi Rapace, and Danny McBride, Alien: Covenant will open in the US and UK on May 19, 2017.