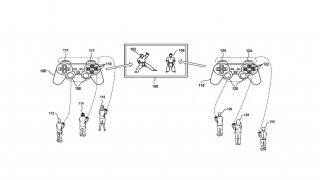 The Xbox Series X may have just had its official debut, but a newly discovered PS5 patent may have revealed more about Sony's own next-gen console, and more specifically its new controller, the DualShock 5.

As first reported by LetsGoDigital, a patent filed by Sony with the USPTO in mid-2018 was recently approved earlier this month, and describes the “Bifurcation of shared controls and passing controls in a video game."

According to the patent, Sony is looking to develop a controller which can more easily be shared and used by multiple people at once, with different buttons assigned to different players.

This "split controller gameplay" might see one user in command of the analogue sticks, another controlling the triggers, and the third pressing the DualShock's face buttons, together operating a single character on the same screen.

While certain party games like Overcooked 2 already allow for this kind shared experience, a controller which can be customised to enable split controls for any title sounds like Sony is interested in exploring this idea even further with PS5.

The patent also speaks of turn-based sharing via the cloud, in which different PlayStation Network users play the same game on rotation, and there's even a hint that the upcoming next-gen PS VR headset in the works could also be integrated more closely into this shared experience.

Frankly, it's all a little bit vague, but the images included in the patent give you a pretty good idea of what Sony is aiming for, if this pertains to PS5 at all, that is. We'll let you know when we hear anything more official but, for now, check out team GR's first impressions of the Xbox Series X.