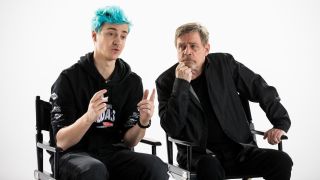 Fornite's new Star Wars: The Rise of Skywalker content is pretty cool, but getting Mark Hamill to show it off is even cooler. Luke Skywalker himself joined Ninja to play some good ol' fashioned Fortnite in an Xbox Sessions special feature. Star Wars crossover intensifies, indeed.

As you'd expect, Mark Hamill is playful, sweet, and a bit zany. He can't give us any info about Rise of Skywalker, but he does speak to the charity work he's proud of, and discusses his connection to gaming. "For me, gaming was a bonding experience when they were young," he says, "And I'm talking like four, five, six, okay. And we were entry level, the first system we bought was Odyssey 2, and the next thing we got was was Atari. And it went on and on. The hilarious thing was in six to eight months they were far more accomplished than I was. I really recommend it for young parents."

Hamill also chats about his legacy as a voice actor, and how different voice acting is for video games. "It's unlike anything else you do," he points out, "If you're doing a television show, or a movie, or a play, it's a finite linear script in three acts. With video games, as you know, there's alternates, there's a neutral reaction, a negative reaction, a positive reaction. So the scripts are like double phone books. This is schizophrenic!"

Check out the stream below.

The Star Wars x Fortnite collaboration includes a Star Wars glider, lightsabers, and a TIE Fighter crash site joining the battle royale, plus an exclusive Star Wars: The Rise of Skywalker trailer that debuted in Risky Reels, the in-game, drive-in movie theater. Even J.J. Abrams made an in-game cameo to tee up the clip. If you didn't catch the event (many people had trouble signing into Fortnite's servers), we've rounded everything up here.

We know Hamill is strong with the Force, but is he strong with the Fortnite? Probably not - two years ago he responded to a fan on Twitter who was complaining about Star Wars Battlefront 2 with " I don't play video games." He may lend his voice to them, but he's certainly not a gamer - he only played them for his kids, guys. Just the sheer concept of the zany Mark Hamill interacting with the slightly manic Ninja while attempting to play Fortnite is enough to get me to tune in.