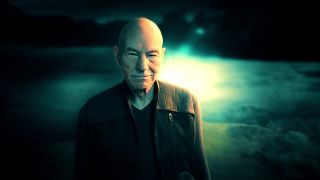 He was was arguably the definitive Star Trek captain, a man who exuded so much authority that ‘what would Jean-Luc Picard do?’ is a pretty good mantra for life. When we meet the USS Enterprise’s former commanding officer in Star Trek: Picard, however – nearly two decades after the events of Star Trek: Nemesis – he’s in a very different place.

These days, Picard’s plagued with feelings of guilt about the death of Lt Cdr Data, his android friend and colleague, and haunted by the failure of a mission to save the inhabitants of Romulus from a supernova. And to make matters worse for the 92-year-old Picard, the Federation and Starfleet are no longer as comfortable inhabiting the moral high ground as they were in The Next Generation era.

“We’re living and working in a different world,” reveals Sir Patrick Stewart, returning to the role that made him a Hollywood star. “Picard’s world is so different, he is no longer part of Starfleet, and the Federation also has been undergoing changes. There are conflicting bodies within the Federation, and Starfleet seems to have some subterranean plans of how its fleet should be used.

"Picard has walked away from it all, and is living on his chateau, growing grapes – he’s living with the two wonderful people who care for him [Romulans Zhaban and Laris], and his dog [Number One]. But he is discontented, angry and guilty, he feels that he failed. Not only did he fail Starfleet and the Federation, but he failed his great friend and colleague Data as well – Data died when he believes that it ought to have been Picard.”

While Data is no more, the android’s presence will be heavily felt in Star Trek: Picard – not least because Next Generation star Brent Spiner has come back to wear those yellow contact lenses once again.

“Data is our sort of classic artificial intelligence,” says Star Trek: Picard executive producer Kirsten Beyer, “and in Star Trek we’re always addressing that question of what that means. ‘Is he a living thing? What kind of rights does he have? Is he a machine? Is he a tool? Does he belong to us?’ That’s a conversation Star Trek: The Next Generation was having in its very first season, so now, 20 years later the most important and sort of interesting facet of that was the love that Jean-Luc Picard developed for Data, no matter what he was, and the way that that relationship stayed with him long after Data’s death in Nemesis.

"In our early conversations with Patrick, realising that was one of the biggest holes left in Picard’s heart, and a piece of unfinished business, was really powerful and impactful. It really affected the subsequent direction [of the show] a great deal.”

GamesRadar+ also spoke to the Picard team about where the show fits on the Star Trek timeline and how the Borg will play a key role in the show. Our sister publication SFX also spoke to Stewart about his future in the Star Trek universe, with the actor revealing he would love to work with Quentin Tarantino. We've also put together a guide on how to watch Star Trek: Picard online.