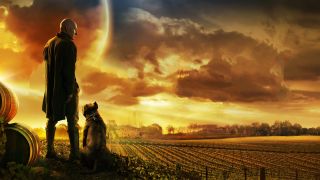 It’s an old cliché that science fiction tends to say as much about when it’s made as when it’s set. So even though Star Trek: Picard takes place at the dawn of the 25th century, its cast believes it has plenty to say about our present.

“I think if we were ever in need of a hero it’s now,” says Jeri Ryan, who plays recovering Borg Seven of Nine, speaking to GamesRadar+. “It’s perfect timing.”

In the era of Star Trek: The Next Generation, where Jean-Luc Picard first became an icon, the United Federation of Planets was effectively a utopia, with its residents more driven by a desire to better themselves than politics or the acquisition of wealth. When we return to that universe some two decades later, however, various wars (most notably with the Borg and the Dominion) and the destruction of the Romulan homeworld, Romulus, have taken their toll. Basically, life isn’t looking quite so rosy.

Indeed, Raffi herself is light years away from the clean-cut Starfleet officers we’re used to seeing in Star Trek shows. “What I liked [about the character] is that she’s haunted,” says Hurd. “She has regrets, and she has found herself in a world that she created for herself and is really struggling to navigate. She’s therefore found herself leaning on crutches and vices.

“What’s really beautiful about being able to tell Raffi’s story is to say that we shouldn’t be written off because we’re struggling,” she continues. “It’s not an overnight fix. It’s something where we might stumble and stumble again, because this is what happens with addiction, with demons on our shoulder, with the struggle of being haunted by choices, decisions, and regrets. I love that we’re telling some imperfect stories – she’s perfectly imperfect! And I get to curse!”

The spirit of hope and optimism

And yet, despite the potential for darkness in its themes, Star Trek: Picard won’t be abandoning the optimism that’s been a part of the franchise since Gene Roddenberry launched Kirk, Spock, and co. on their original five-year mission. “The spirit of hope and optimism is always there, and that’s what I think characterises Star Trek in such a big way,” says Isa Briones, who plays the mysterious Dahj. “That will always be there, even though the stories are different. The world has changed, and so the show needs to change with it, and tell these stories that are relevant today that people will connect to now – the world is very different to 20 years ago.”

“When you look around the world, there are so many troubles coming from people believing different things or worshipping different gods,” adds Harry Treadaway (the Romulan Narek). “You think a show like this is absolutely kind of opening up the realm of understanding others from different planets or from different times. I can see why Star Trek resonated in the ’60s, I can see now why we need it even more, and I think to have an optimistic, hopeful view of where humanity could go, even if Earth changes drastically, is a beautiful thing.”

And who knows, maybe Jean-Luc Picard may even be able to help planet Earth in real life… “It was actually seriously suggested to me that I should take American citizenship and run for the Senate!” laughs Sir Patrick Stewart.

Are you a newcomer to the Star Trek franchise? Then it's worth watching these 10 key Star Trek: The Next Generation episodes before Picard begins.