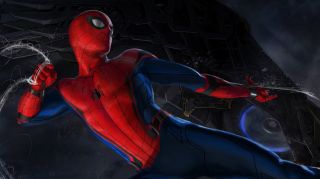 We only found out yesterday that Spider-Man: Homecoming has added Orange is the New Black's Michael Chernus to its cast as master tech villain The Tinkerer, Phineas Mason,  but rumours have given us a few more details about this specific iteration of the character. If you don't want to know anything about the plot then look away now.

Right, now they're gone, we can get into the juicy web-flavour bits. As reported by Heroic Hollywood, sources have said that The Tinkerer is an ex-Stark Industries employee who was personally fired by Tony Stark. Oh look, an instant vendetta against heroes.

Heroic Hollywood is saying that The Tinkerer then provides tech to both The Vulture -  who it's saying is definitely played by Michael Keaton but this hasn't been confirmed - and The Shocker to prove it was a mistake firing him. Again their sources are apparently reporting that The Shocker is played by Fargo actor Bokeem Woodbine. This also hasn't been officially confirmed so take it with a pinch of salt for now. We'll keep you updated on any official casting news and check out our Spider-Man: Homecoming cast list to check out the rest of the line up so far.