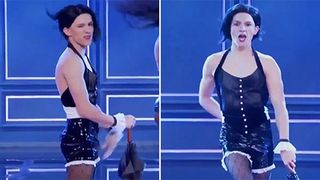 What are Spider-Man: Homecoming's Tom Holland and Zendaya like when they're not on the set of Marvel's next blockbuster? Well, like a great many young adults they enjoy dancing and singing along to pop music. Combining that with their professional showmanship, you get a pair of wonderful performances on the TV show Lip Sync Battle.

Zendaya performing "24K Magic" by Bruno Mars on Lip Sync Battle...this girl can do anything. 🔥🔥🔥 pic.twitter.com/iAaTrJ8LlxMay 8, 2017

First up was Zendaya, paying tribute to Bruno Mars with the song "24K Magic." It's a solid act, and with Zendaya's experience as a singer, she probably could've sang the song as well as she lip-synced it. But then along came a spider and…

Tom Holland's full performance of Rihanna's “Umbrella" on Lip Sync Battle. He did that. TOM HOLLAND DID THAT EVERYONE 👏🏽 pic.twitter.com/ZpKC6s8moYMay 8, 2017

Wow. Did that radioactive spider also give Holland super dance powers? Sure his lips don't match quite as well as Zendaya's, but the clever fake out of "Singin' in the Rain," plus the confidence with which he wears that outfit, plus the theatricality of the whole bit were absolutely top notch.

Hopefully we'll see more of that swagger when Spider-Man: Homecoming swings into theaters in July.