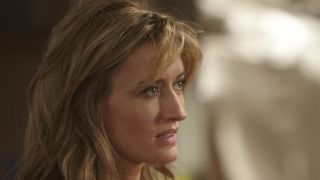 Showtime’s Halo TV series has officially rounded out its main cast. At the TCA press tour, the cable network announced that Natascha McElhone (Californication) will play both Dr. Catherine Halsey and the most advanced AI in human history, Cortana. Emmy nominated Bokeem Woodbine (Fargo) will play Soren-066, a character who first appeared in a Halo short story called Pariah. The two will star opposite Pablo Schreiber (Orange is the New Black, American Gods) as Master Chief, or John-117, whose casting was announced back in April.

Dr. Catherine Halsey is a brilliant but extreme scientist who created the SPARTAN-II super soldier program that created Master Chief. She was viciously protective of her super soldiers and ultimately arrested for attempting to hide all of them from the military so they wouldn’t die in battle. Before that, Halsey cloned her brain to create the AI known as Cortana, who plays a central (and beloved) role in the Halo series.

In Halo lore, Woodbine’s Soren-066 went through the same super soldier program as Master Chief but was horribly disfigured during one of the procedures. As a result, he was forced to work a desk job, filling him with rage and resentment. According to Deadline, Showtime describes Soren-066 as "a morally complex privateer at the fringes of human civilization whose fate will bring him into conflict with his former military masters and his old friend, the Master Chief."

Showtime also announced that Shabana Azmi, a decorated Indian actor who has starred in over 140 films, will play Admiral Margaret Parangosky, the head of the Office of Naval Intelligence, and known foil to Dr. Halsey.

The remaining three casting announcements are roles created specifically for the series, and all Spartan soldiers. British actor Bently Kalu (Avengers: Age of Ultron) will play Vannak-134, a sort of deputy to Master Chief, Natasha Culzac (The Witcher Netflix series) steps into Spartan boots as Riz-028, and Kate Kennedy (Catastrophe) will play Kai-125.

Showtime is calling Halo its most "ambitious series ever" and is partnering with 343 Industries and Stephen Spielberg’s Amblin Entertainment to create it. The show will highlight the human/Covenant conflict central to the Halo trilogy. It’s set to debut in 2021 and is starting production in Budapest later this year.

Can’t wait three years for the Showtime’s Halo debut? Here's our list of the best new TV shows to hold you over.