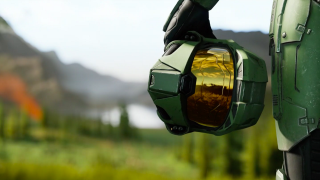 Showtime has finally found its Master Chief! The network revealed that actor Pablo Schreiber will be taking on the role of John-117 in Showtime's upcoming Halo TV series. You may recognise Schreiber from shows like Orange is the New Black and American Gods.

The Halo Showtime series will, as per reporting by THR, revolve around Master Chief and his attempt to battle back the Covenant in the 26th Century, with the show looking to "weave deeply drawn personal stories with action, adventure and a richly imagined vision of the future." It is understood that the show will take inspiration from the plots found in the Halo games but will, ultimately, spin off in its own direction.

It isn't yet clear whether we will ever see the face of the Emmy and Tony-nominated actor – Master Chief has, famously, never given us a proper look at what's hiding underneath that helmet of his in the games – but one thing is for certain, Schreiber definitely has the frame to do the character justice. Fun fact: Schreiber is 6ft 5in tall, and that's just five inches short of John-117's actual height, when out of the Spartan armour of course.

Schreiber isn't the only Halo casting Showcase announced. He will also be joined by Yerin Ha as a brand new character to the wider Halo universe. Ha will star as a character by the name of Quan Ah, who Showtime describes as “a shrewd, audacious 16-year-old from the Outer Colonies who meets Master Chief at a fateful time for them both.”

While Showtime is yet to announce a release date, we do know that production will begin this Fall so it isn't unreasonable to expect to see it debut in summer 2020 – unless it is being held to launch alongside Halo Infinite, of course. There's a good chance we could hear more about both at Microsoft's blowout E3 2019 showcase.

Kyle Killen (Awake) and Steven Kane (The Last Ship) will serve as co-showrunners and executive producers of the show, while Darryl Frank and Justin Falvey of Steven Spielberg’s Amblin Television and Halo developer 343 Industries will also be involved in executive producer capacities. Otto Bathurst (Black Mirror) is set to direct the pilot of the nine-episode series.

It's great to see the Halo TV series back up and running after reported complications in production back in December. It won't be long for us to wait now to see whether Schreiber can do justice to the iconic character.

Looking for something to watch while you wait for Halo's TV debut? Here's our list of the best new tv shows and look below to see what's going on in the world of gaming, TV, and movies this week!