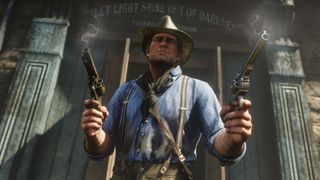 Valentine or Strawberry are the best towns to complete this challenge, as the law enforcement isn’t as extensive or eagle-eyed as those in larger cities like Saint Denis and Blackwater. To hold up someone, aim your gun and press the rob button, threatening or beating them if need be until they give you their money. Make sure you wear your mask to prevent being easily identified.

Fences are black market merchants in Red Dead Redemption 2, the first of which is found at Emerald Station, east of Valentine, and you can bring any stolen coaches to his stable to earn a quick buck. Either hijack these from travellers out on the road and return them to him, or rob the lockboxes on the backs of more opulent carriages to complete the challenge.

That’s a lot of cash registers. You can rob money from the general store, doctors, and gunsmith in Valentine (done by aiming your weapon and the cashier and pressing the rob button), but you’ll to travel to Strawberry the fourth check mark on this challenge. To make sure you don’t run out of time, start the challenge in the morning, as soon as the shops have opened, and get robbing.

This is essentially the same challenge as Bandit 2, just with at time limit. Hold up the paths leading in and out of Emerald City for time-effective coach robberies that can then be brought back to the fence quickly and quietly.

If you’ve been pursuing the Bandit Challenges within the same area, you should already have a hefty bounty on your head. It’s simple really; commit as many crimes as you can without paying off your bounty until the dead or alive fee reaches a cool $250.

Clemens Cove is a few clicks north west of Rhodes on the Red Dead Redemption 2 map, and the horse fence there will buy illegally obtained mounts from Arthur for a decent price. You just need to find and steal five of them, either from riders and carriages on the trail or from any stables in town, to complete this challenge.

This is essentially the same task as the first Bandit challenge, in which you have to hold up and steal cash from passers by until you rack up $50 worth of money. Target less dodgy looking folk (i.e. anyone who doesn’t look like a cowboy) for a better chance of receiving dollars rather than the barrel of a gun to the face, and those who are better dressed (i.e. wealthier), preferably in Saint Denis, for the likelihood of more money.

Again, this is very similar to Bandit Challenge 2, but you’ll need to target wagons rather than coaches for it to count when you sell them at Emerald Ranch’s Fence. You can find these out on the road pretty much anywhere in Red Dead Redemption 2, but it’s easiest to hang around Emerald Ranch to shorten the distance required to bring them back.

To hogtie someone, aim your lasso at them from a close distance and reel them in, before pressing the hogtie button to wrangle them into submission. You can then pick them up, stow them on your horse, and find the nearest railroad tracks to place them neatly down. Then, it’s just a matter of waiting for the train.

Bandit 10 - Complete 5 train robberies without dying or being caught

You can rob trains by boarding them and aiming your gun at any of its passengers or guards and pressing the rob button. The easiest way to find a train is to buy a ticket at a nearby station, and one will magically transport to you via the fast travel system, at which point you can begin the theft, though I’d wait till it’s moving and away from any civilisation to reduce the chance of being killed or caught.