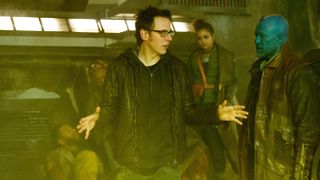 In an extended Facebook post, Gunn explains how he wrestled with the concept of coming back for a third movie because he didn’t want to run the risk of making a crappy third film (a trap many trilogies fall into). But ultimately, he says he loves the characters too much and still thinks “they have more adventures to go on and things to learn about themselves and the wonderful and sometimes terrifying universe we all inhabit.”

Intriguingly, he also revealed that Guardians 3 will take place after the events of Avengers: Infinity War, it will “conclude the story of this iteration of the Guardians of the Galaxy,” and it will “help catapult both old and new Marvel characters into the next ten years and beyond.” Could this mean that a new group of characters will take on the Guardians’ mantle? Fellow space-faring superhero Carol Danvers, aka Captain Marvel, perhaps? She seems like a perfect fit to keep the cosmos safe.

The first Guardians might be my personal favorite Marvel Studios movie, and that’s largely because of Gunn’s complete mastery of the movie’s tone and the unapologetic way the movie takes things to a weird place beyond any franchise film we’d seen at that point. This is a movie about a talking tree and a gun-toting raccoon; that sounds ridiculous on the face of it, but Gunn was so great at crafting the emotional story that I’ll be damned if I didn’t have a tear running down my face at the big “We are Groot” moment at the end. And Vol. 2 looks to take that zany visual flair and glorious weirdness to the next level. I’m glad Gunn will be around to wrap up the story of these characters.

Written and directed by James Gunn and starring Chris Pratt, Zoe Saldana, Dave Bautista, Bradley Cooper, and Vin Diesel, Guardians of the Galaxy Vol. 2 arrives in theaters on May 5, 2017. Be sure to stay in your seats, because that baby has five (!) post-credits scenes attached to it.