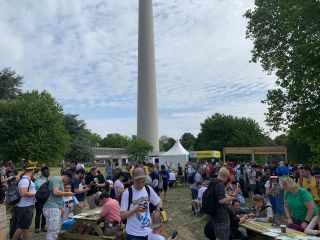 If you cast your mind back to the summer of 2016, unless you were living under an enormous rock, you'll remember the Pokemon Go craze. It felt like anyone with a smartphone was out and about, flinging virtual balls at fictional monsters imposed onto the real world through augmented reality. Older players were re-introduced to the franchise with a near-lethal dose of nostalgia, while the younger crowd could get to know the creatures that kicked off the entire series back in the '90s. Towns, parks, and suburbs were full of people playing Pokemon Go, and the aptly named Pokemon Go Fest aims to channel the feelings of those first few months with some added incentives.

I'm not a hardcore Pokemon Go player by any means. I've been playing since launch but I took a substantial break around the time Gen 3 started rolling out towards the end of 2017. For context, I'm only around level 35 in-game. So for a player like me, who only plays to and from work, and during the monthly Pokemon Go Community Day events, the idea of attending Pokemon Go Fest hadn't really occurred to me before until this opportunity in Germany was presented to me. Some of my fondest memories playing the game came during that initial summer though – notably sprinting through the streets of Bath hunting a wild Dragonite – so the concept of being surrounded by like-minded players once again was intriguing, especially in a foreign country.

My day started off strongly enough; after following the crowds skirting around the edge of Dortmund's iconic Westfalenpark park towards our designated entrance, I checked in and emerged into the sprawling space by an enormous yellow tent, meant to be the home for Instinct players. While I should have leaped straight into action, hunting for shinies or trading with the hundreds of other players around me to help complete my Pokedex, I was immediately distracted by the line for the merchandise counter that stretched way back into the trees, as players had their eyes set on picking up some Pokemon plushies. Growlithe and Ditto were my choices, and at €16 apiece, not as expensive as I expected for official merch.

The crowds continued to flood through the gates, and players got started with the exclusive Go Fest special research, which offers the mythical Pokemon Jirachi as a reward. Westfalenpark – a sprawling space, one of the largest inner-city parks in Europe – was split up into four regions, each spawning different types of Pokemon; Steel Factory provided Steel-types, Boat Lake was for Water-types, Rocky Terrain had Ground-types, and Mysterious Woods gave out Psychic-types. To encourage players to visit every corner of the park, the special research had tasks like "Catch five different species of Ground-type Pokemon", which could only be found in Rocky Terrain, and "Take a snapshot of Meditite in the Mysterious Woods." This meant that there was a lot of ground to cover, but easily manageable across the full day. My feet were utterly exhausted by the end of the day though!

An event for everyone

While it was truly wonderful to see so many players come together to enjoy playing Pokemon Go, the most incredible part of the event was how many people from different walks of life were there and with a phone in hand. While there were a lot of players from Germany - as you'd expect from an event held in Dortmund - I ran into players from all walks of life and countries. Plenty of American players had made the trip over, there were a lot of players from countries like Japan and Korea trying to offload their regional Farfetch'ds, and it wasn't uncommon to bump into players from further afar like Australia. I saw plenty of players there with multiple phones on the go at once, young children who couldn't be more than five years old boasting to their parents about their shinies and 100% IV catches, elderly players, people in wheelchairs – honestly, it felt like the only thing that would actively stop somebody from enjoying Pokemon Go Fest was the sun, how I didn't walk away from the event with a horrible sunburn I'll never know.

There were, thankfully, a handful of opportunities to take a break from the heat thanks to infrequent network issues forcing me to put my phone away. The Pokemon Go Fest had a famously rocky debut back in 2017 – when it was held solely in Chicago – because of the severe network problems that players had to suffer through, where attendees could barely catch a single Pokemon before their games crashed. Two years on however, and developer Niantic has largely solved the issues that arise when you have so many players active in one place. The biggest issue that I encountered on the day saw my phone's network connectivity stop working altogether for almost an hour, although that may be down to forgetting to pick up a German SIM card prior to the event, and instead relying on my network in the UK to get me through.

Still, this network outage was the perfect excuse to go and meet some of the other trainers out there in the wild. One woman I spoke to for a short while – Emma from Wales – had attended with a group of players, all kitted out in their own homemade branded Pokemon Go T-shirts. She told me that she had multiple phones on the go but was having a rest due to network issues. And even though all of her accounts were level 40 (the max level in Pokemon Go), she considered herself to be one of the slackers amongst her group. While I knew devoted players like Emma were out there, I didn't quite realise the dedication it takes to reach such a goal. Having those elite-tier players alongside the level 20+ people who were still missing countless Pokemon from their Pokedex proves that Pokemon Go Fest truly is for everyone, and the community is unbelievably welcoming. Emma went on to tell me that she'd found 15 shinies so far – a stupendous total compared to my measly four by that point, two of which were Magnemites.

The hunt for regionals

One of my main goals from Pokemon Go Fest was to acquire some of the Pokemon Go regionals I was missing – Pokemon that can only be caught in specific locations in the real world. To accomplish that, I needed to find players to trade with, so I headed to the Trading Outpost in the middle of the park, close to the Valor tent (shout to my Valor comrades out there). The normal restrictions behind trading Pokemon were nerfed here, so stardust costs were halved. Two poor event staff were sat on a bench with about three marker pens, a crate full of signs to hand out, and an army of people surrounding them trying to get a pen to write on their sign. On one side, it said "Willing To Trade", while the other side had a simple "Looking For". This was the place to be if you were looking for a specific pocket monster.

The common Pokemon players were pursuing were ones like Relicanth, Chatot, Pachirisu, Uxie, and Azelf. These are all regionals found far, far away from Dortmund and Europe in general, which meant that my horde of Mr. Mimes and Volbeats were essentially useless. The only Pokemon I could really offer were my rare shinies; I got rid of shiny Azurill for Heracross and shiny Wynaut for Tropius, two regionals I wouldn't be able to catch any time soon. Maybe I'll go to Pokemon Go Fest Yokohama next year, where I'll have a bunch of rare Pokemon from Europe to trade with people…

As much fun as I was having, the execution of the event wasn't flawless. After doing a few other trades, exchanging shinies and legendaries, I found myself at around 200k stardust despite starting at over two million. Despite the amount being significantly reduced, it was still too much to complete special trades, which required 500k. To the young boy who didn't speak a word of English but really wanted my shiny Bagon in exchange for a Torkoal, I am so sorry; I wanted to do the trade so badly! The same goes for the lovely German couple from Dusseldorf who wanted to trade me a shiny Spoink for one of my shiny Magnemites – I hope you got lucky and found one after we parted ways! On behalf of the players who have forked out ridiculous money to fly overseas and attend this annual event, Niantic, please remove all trading restrictions. The entire event has an incredible sense of community that passionate players have brought to a single park on the outskirts of Dortmund, so to then be blocked by trading restrictions that inherently prevent you from engaging with other players and making friends is absurd.

Where are the raids?

Seeing the entirety of Westfalenpark lit up with lured Pokestops wherever you walked was glorious in-game, but there was one common aspect of Pokemon Go that was missing: Gyms. There wasn't a single gym inside the park, which of course meant that there were no raids either, despite the thousands of players all attending for the same cause. This was clearly communicated by Niantic prior to any of the Go Fests taking place, but I didn't realise quite how badly they'd be missed till I was there. If level five raids were taking place at gyms throughout the park, perhaps with random legendaries from the existing pool so any players who missed one or two could finally obtain them (I need an Articuno so badly to complete Gen 1!), the whole event would've felt much more fulfilling.

Pokemon Go Fest truly is an incredible place to go, because even when the event isn't going on inside the park, the entire city of Dortmund was a hub for Pokemon Go players. The following day, as I wandered through the city to kill time before my train home, the streets were absolutely flooded with players. There wasn't anything special going on; gyms had the usual raids and while the shiny rate was allegedly boosted throughout the entire city and not just the park, I only managed to find three shiny Slakoth, which were more common anyway due to the special event in compensation for the failures during June's community day. With that said, gyms were amass with players fighting for control or waiting on raids – I took part in multiple raids at various levels which all hit the 20 player limit and then some, because there were clearly much more than 20 players stood around the square, furiously tapping away at their phones.

Some people have claimed that Pokemon Go is a "dead game", because there's not as many people openly playing it as there was during the first summer it released. Pokemon Go Fest is evidence that isn't true whatsoever; the global community is as strong as ever, and it was wonderful to be part of, despite some of the issues. This is Pokemon Go at its finest, but I just wish I had someone to attend with because doing it solo isn't anywhere near as fun as it would've been with a friend. If you've stopped playing Pokemon Go over the last couple of years, give it another shot, enlist some pals alongside you, and seek out a local group of Pokemon Go players – I promise you that they are out there, somewhere. Few games have managed to create such a brilliant community in such a short space of time – especially one that integrates with the real world so seamlessly – and the Pokemon Go Fest was an almost perfect reflection of that.