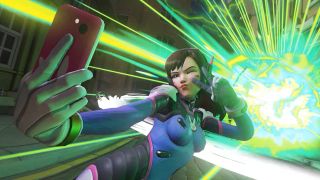 Ever want to see the old glories of Overwatch, before all the heroes decided to team up six-on-six and take turns pushing a payload? The new Overwatch Uprising event is, as McCree would say, your huckleberry.

The main event is a new PvE game mode that lets four players cooperate to break through the Omnic occupation of London, and you can play it through the end of the month. Even if you're less enamored with the competitive multiplayer modes, Blizzard knows how to make a mighty fine PvE experience. The main Uprising game mode stars four set characters: Mercy, Reinhardt, Torbjorn, and new recruit Tracer. They'll fight AI-controlled Omnic troops, with Soldier 76 (that's Commander Morrison to you) and Ana Amari issuing commands via voice comms.

If that sounds too limiting, you can play another Uprising mode that - canon be damned - opens up all 24 characters for play. You can earn special achievements in both modes. Most importantly, however, NEW LOOT BOXES. You can earn them by leveling up or buy them directly, as always, and they include new skins, emotes, and highlight intros as you'd expect. Honestly? There's only one you really need.

Yes, that is D.Va taking a selfie with her self-destructing mech. Winky face. On second thought, this Blackwatch Genji skin also feels like an early must-have. You have until May 1 to get it, when the event will end and the loot boxes will resume their standard "three grays and a blue you already have" form.

If you want more Overwatch (it's so good) check out our 5 favorite Overwatch moments for this week.