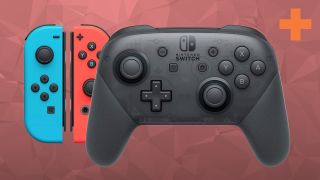 Finding cheap Nintendo Switch controllers isn't always easy, particularly when it comes to the official models. Nintendo products are notoriously slow to come down in price. So imagine our excitement when we spotted some rare discounts in the wild!

In the US, Walmart's cheap Nintendo Switch controller sale puts the Pro Controller down to $59, a drop of $10 and the lowest price it's been for a while. The Pro Controller isn't the only handset that's been discounted, though. Want an extra pair of Joy-Cons instead? Walmart knocked ten bucks off the MSRP too and they're a much more palatable $69. So you can get set for multiplayer sessions on the cheap if you act fast.

In the UK, it's a more modest discount down on the Pro controller from the standard £55, with 365games double-dipping the discounts down to £51.49. We saw it for a bit less at £49.99 elsewhere a few weeks ago, but this might be the best price you see in the UK for a while as the Pro controller rarely gets a decent deal there. The Joy-Cons are getting a much better deal today though and are £10 less than normal over at GameCollection.

Nintendo Switch Pro Controller | $59 at Walmart
The official Nintendo Pro Controller is roundly praised for its design, comfort, and build-quality, so get it while it's cheap with this deal.View Deal

Nintendo Switch Joy-Con pair | $69 at Walmart
If you want to have a big multiplayer session on the likes of Mario Kart 8 or Splatoon this is the way to go. Grab this offer for $10 less than the usual price. The gray or pink/green pairs are available for similar prices today too.View Deal

Nintendo Switch Pro Controller | £51.49 at 365games
Based in the UK? This offer on the Switch Pro Controller will save you a few quid on the overall price. It's not a big discount, but you might be waiting a while for something better, especially as stock is sometimes hard to find.
View Deal

Nintendo Switch Joy-Con pair | £59.99 at GameCollection
Yes, Nintendo actually set the price of a pair of Joy-Cons at £70. Ease the pain with a rare £10 discount today on the popular red/blue combo. There are a bunch of other colours available too at the same price.View Deal

A cheap Nintendo Switch controller sale like this is definitely worth taking note of. Joy-Cons are reduced to $69 fairly regularly, but the Pro alternative usually holds its value pretty stubbornly. And although it's arguably overpriced compared to the PlayStation DualShock 4 or Xbox One handset, it backs up that cost with premium build materials, excellent comfort over long play sessions, and satisfying controls that have clearly been fine-tuned to the nth degree by Nintendo. They're also the best choice when it comes to single-player games like The Witcher 3 or multiplayer fighters such as Super Smash Bros. Ultimate.

That's not to say you should ignore the Joy-Cons. They're perfect if you want to get as many people playing Mario Kart 8 Deluxe as possible, mostly because a pair of Joy-Cons can be split between two people. If that sounds more your speed, we'd definitely recommend picking up a pair - they're better value for money than buying individual units separately.

Either way, don't hang about - the Pro Controller isn't likely to stay at that lower price for too long.