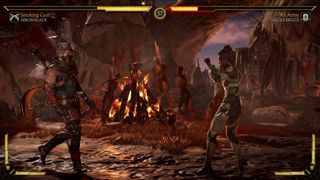 Mortal Kombat 11 will soon support crossplay between PS4 and Xbox One, NetherRealm Studios has announced.

The way it works is fairly simple: enabling the Krossplay option via the Online menu will open up matchmaking to any player on Xbox One or PS4 in Online Kasual modes. Additionally, designated Krossplay rooms will allow Xbox One and PS4 players to coordinate outside the game and meet up in a specific room to play together.

All progress, unlocks, and purchases are still exclusive to the platform and account you started with, and nothing can be transferred to other platforms.

You'll be able to tell if you're up against a player on a different platform by the crossed-arrows icon on their Kombat Kard, whereas a player using the same console will indicate as much in the same space.

As mentioned earlier, it isn't clear exactly when crossplay will go live in Mortal Kombat 11, but a tweet from NetherRealm Studios says it'll be tested in the latest patch in beta form.

Once you get tired of bloodying each other up across platforms, you and your friends can make up with the 25 best co-op games to play right now.