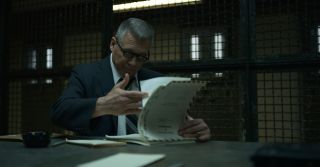 With Mindhunter season 2 fast approaching, Netflix has releases some images from from the forthcoming batch of nine episodes. However, this not being your average crime show, there's a catch. Rather than allowing us to share every image perused by the Gamesradar and Total Film teams, the streaming service has only allowed us to share eight of those photographs with you, our dear readers.

So, what can we deduce from the photographs we have seen? As we already know, Jonathan Groff and Holt McCallany are back as Holden Ford and Bill Tench. However, we can also confirm that Cameron Britton's serial killer Ed Kemper will be back, and this time he's apparently helping the detectives work out the identity of a new killer.

Did we mention that we have also seen the trailer for Mindhunter season 2? Yes, there's a trailer ready to go. "Have you got someone Holden, someone you can't catch?" says Kemper. "The person you're after has an overwhelming fantasy life. Fantasies of what he has done, what he wants to do. His dreams will consume him. Soon the real world won't even compare." Holden then asks, "How do we catch a fantasy Ed?" to which the killer responds: "You can't."

Intrigued? We certainly are. Here are the pictures. There's not much to go on, but a couple of the smaller details spotted in the background of some of the shots, along with what's written in Holden and Bill's notes, might give you some clues as to who the next killer is.

Spot anything suspicious in the above images? Let us know in the comments below. Mindhunter returns to Netflix on August 16.

The official synopses for season 2 reads: "FBI agents Holden Ford and Bill Tench probe further into the psyches of those who have done the unthinkable. With help from psychologist Wendy Carr, they apply their groundbreaking behavioral analysis to hunting notorious serial killers."

Wondering what to watch on Netflix in the meantime? Why not check out out list of best show on Netflix.