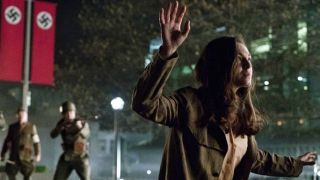 It’s slow, it’s deep, and it’s incredibly dark, but The Man in the High Castle’s tale of a world thankfully never realised is one of the most potent weapons Amazon Prime has in its arsenal. As some critics observed after the first season had aired, arguably more happened in the show’s pilot than in all of the following nine episodes combined. That’s not necessarily a bad thing, however. The end of The Man in the High Castle season 2 built to a crescendo: a tale in which the lives of every American depended on pure politics thousands of miles away in Berlin.

The series’ ability to leave you scratching your head as you try to work out who you should be rooting for in a world dominated by Nazis, Japanese Imperialists, and a Resistance perfectly content with killing its own is the show’s stand-out feature. This is no simple tale of good versus evil and, as a result, there’s room aplenty for the writers to explore the best and worst of human nature when fascists rule the roost. That’s why, with a third season now confirmed by Amazon for a likely broadcast later this year, it’s time to pick over just what I’d like to see in the next ten episodes. When you consider large chunks of the cast from the first two seasons are now no longer with us (I’ll be damned if Frank survived that head-on blast in the Kempeitai HQ), the producers have an almost entirely clean slate to work with. It all means that the show that comes back this year just might be entirely different to the one we said goodbye to at the end of last year. Exciting, eh?

One of the most spine-tingling facets of the second season was the glimpse it gave us of Berlin. Not only does the techno-wizardry employed by Amazon mean we get a peek at the authoritarian architecture the Nazis had planned for their capital (the producers, it seems, have remained faithful to Hilter’s orderly vision), but we also get to see National Socialist politics in play.

Fans of the original book will be aware writer Philip K. Dick concentrated on the Japanese Empire’s impact on the Pacific States. Amazon, however, has focused its cameras on the power play taking place behind the scenes back in Germany. Hilter’s subordinates spent last season undermining each other in order to take charge once his throne was vacant. Now he’s dead - and Martin Heusmann and Joe Blake apparently incapacitated - Nazi Germany’s future appears to be in flux. Might a more moderate force take control of the Reich? Or is conflict with Japan inevitable, whoever takes charge? Hitler’s death has lifted the lid on a pot threatening to boil over, the consequences of which may well dominate season three.

2. And how about seeing a bit of Britain?

It might have been one of the main theatres of war when Hilter looked to sweep Europe’s major powers aside, but in The Man in the High Castle, the UK is yet to make an appearance. All we know about plucky ol’ Britain is that is sits within Nazi territory - and even that’s only according to an especially brief look at a map of the world in the final episode of the second season.

As active as the resistance against the Germans is in the US, it’s hard to imagine there isn’t a similar movement in a parallel universe UK, too. The Brits are unlikely to have rolled over and just taken Nazi rule, so how about an eye on what’s happening in on the other side of the Atlantic? In fact, how about showing how the whole of Europe is coping with the Germans in charge? Or even dipping the show’s toes into what remains of Russia - seemingly a no man’s land without German or Japanese influence, based on that same map of the world. Might the resistance have a foothold here?

3. A greater play on parallel universes

One of the key facets of the series pushed by the Man in the High Castle himself is that there are many different universes depicted in the films he collects. What’s even more interesting, however, is that the same people tend to crop up in each one, although their roles can differ wildly. This is a point rammed home consistently towards the end of the second season: a good man can do terrible things if he finds himself working for bad people. So far, however, the only parallel universe we’ve seen played out on screen is that most closely aligned to our own: a victorious America in an atomic stalemate with a rampant Soviet Union.

Trade Minister Nobusuke Tagomi spent the majority of the second season living in this reality, with Juliana playing the role of his daughter-in-law. But what about other universes? How about seeing some of our favourite characters in less familiar roles? What about a world where John Smith remained loyal to the US and now works within the resistance? Or where Juliana is bedded in with the Kempeitai in San Francisco rather than fighting against it?

Detailing new worlds, either with films that make their way to the High Castle, or full on visions such as that suffered by Tagomi opens up the possibility of all kinds of fresh stories being told, with characters alive or dead.

We’ve seen the Germans. We’ve seen the Japanese. The other great Axis power, however, has yet to make an appearance. Italy might have been little more than a puppet state towards the end of the war in our reality, but in a universe where Germany was victorious, just how much of the cake was handed to their friends south of the border? It’s a testament to how well The Man in the High Castle’s writers have been able to tell their tale within relatively confined borders that, US and Berlin aside, the rest of the world remains a wide open playing field.

We’ve already seen how the Nazis hold the Japanese in contempt - the perceived junior partner in their global empire - so how exactly did the politics of Fascist Italy play out? Was there a scramble for power when Mussolini passed away, or did his pal Adolf depose him and grab control for himself? And how is life on the streets of 1960s Rome, Milan and Sicily? Has the Mafia made a return after the purges of the 1920s, trapping the people between a rock and a hard place?

If you thought The Man in the High Castle’s version of San Francisco was full of snakes on every corner, just imagine the fireworks when a vengeful Italian Mafia takes on an over-stretched Gestapo.

5. Greater ties to the book

If there’s one criticism fans of the series’ source material have of the show it’s that, from the word go, it’s been more than happy to stray from the original plot as laid out by author Philip K. Dick. Indeed, while Dick’s The Man in the High Castle looked mainly at life in San Francisco, season two of Amazon’s take on the story had much more to say about the politics and pastel colours of the Reich controlled New York. Of course, there’s nothing wrong with the series’ producers bringing a fresh take to what is now a 55 year old book - it keeps those who have read it cover to cover guessing, for starters - but there is one area where going back to Dick’s original intentions could pay off.

Time travel. Though a full sequel to The Man in the High Castle never saw the light of day, two chapters for a planned-but-never released follow up were published in The Shifting Realities of Philip K. Dick. They detailed Nazi dabbles with time travel - experiments that saw the Germans land in a parallel world where their quest for global conquest had failed. Nevertheless, the Nazis seized the opportunity to steal nuclear weapons from this universe to take back to their own.

Might Amazon  have laid the groundwork for such a storyline? We already know that the Nazis won the war by dropping an atom bomb on Washington, causing US forces to surrender. Might this have been the very atomic bomb that, in our world, fell on Hiroshima? Just how else might Hitler’s forces have messed with the timelines if they had time travel in their arsenal?

6. Bring back The Marshall

One of the tense periods in both seasons of The Man in the High Castle came when Juliana fled to the so-called Neutral Zone. Rather than being a haven for those looking to escape the Japanese and the Germans, however, her destination of choice - Canon City - was rife with lawlessness and vigilantism. The most fearful force of all, however, was The Marshall.

A bounty hunter patrolling Canon City on behalf of the Nazis, The Marshall’s remit was to hunt down concentration camp escapees, amongst others targets, bizarrely placing each face on a playing card. The Marshall was arguably the most cruel character in either season, seemingly taking delight in the emotional and physical torture of his prey before ultimately putting them out of their misery. His appetite for slicing off two fingers from his victims to keep as a memento was particularly unsettling.

In a world where few of the characters could be described as wholly good or bad, The Marshall was comparatively the baddy it was okay to hate. I want to see more, and with Childan and Ed heading off to The Neutral Zone at the end of season two, the prospect of another encounter with the series’ most sinister adversary is one the producers would surely be daft to overlook.

One of the strongest elements of the second season is how the writers manage to convincingly depict how life in the Greater Nazi Reich is assimilated into American culture and nationalism. Key to this is SS Obergruppenführer John Smith’s wife Helen, and her associated ‘Ladies Committee’. Wives of important men in the state hierarchy, Helen and her friends aspire to live up to Nazi ideals  of family and community. However, when John and Helen’s son Thomas is revealed to have inherited a form of muscular dystrophy - a ‘defect’ that should result in the end of his life according to Nazi law - the wafer thin nature of their happiness is exposed.

Indeed, it serves as the perfect example of how National Socialism took root in Germany in the first place: the idea that every friend, every neighbour was watching you in the hope you’d trip up and they could report you to authorities was one that enabled the Nazis to flourish with very little manpower.

It also brought out the best in the show’s cast. When society tells you your sole goal as a woman is to bring up the model family, what happens if you can’t have children? Or if the children you do have get sick? The quest to be a loyal citizen in a nation that punishes even the most minor ‘misdemeanour’ is one we’d like to see more of in the show’s third season. The idea of fascism in the family home is arguably The Man in the High Castle’s most potent plot line.