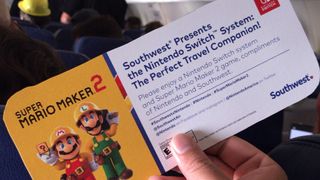 It's been a big few weeks for Nintendo Switch owners. First, we had the release of Super Mario Maker 2, which has already gone on to become on the best Nintendo Switch games of all time.

Then Ninty decided to announce not one, but two new Switch models; the Nintendo Switch Lite and a replacement variant for its original Switch, now with almost twice the battery life. Oh, and we got a Luigi's Mansion 3 release date, as if that wasn't enough news already.

Almost as if to celebrate its post E3 2019 wave of good will, Nintendo surprised an entire flight of passengers on a Southwest Airlines plane to San Diego Comic Con yesterday, by gifting every single person with a free Nintendo Switch and copy of Super Mario Maker 2 to enjoy on their journey, and keep for life.

The biggest upcoming Switch games for 2019 (and beyond)

It's predicted that Nintendo were filming some sort of promotional commercial in line with the surprise giveaway, which also featured the flight's air stewards dressed up in Mario builder hats, and a special Mario Maker 2 level that came preloaded onto each free Switch console. I already own a Switch, but somehow I'm still unhealthily jealous.

The San Diego Comic Con 2019 schedule, meanwhile, kicks off later today, and promises all sorts of news around Marvel Phase 4, The Walking Dead season 10, and much more, so stay tuned to GamesRadar+ for all the latest around that.

For more, check out the best Switch exclusives to play right now, or watch our Release Radar below for a guide to everything else out this week.