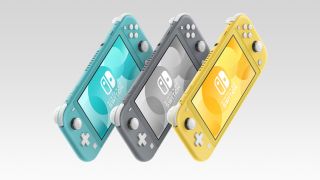 Start saving your pennies, because while the Nintendo Switch Lite is cheaper than a standard console, you’ll still be looking at paying $200 for it (you can find the top deals by visiting our guide on the best Nintendo Switch bundles, by the way). It will play all of your existing Switch games, but with one caveat; it can’t be docked and connected to the TV in any way, which means it’s a strictly handheld device only. You can however connect other Joy-Cons to the console for multiplayer, but you’re all going to be crowded round that small screen.

When it comes to the specs and missing features that make it a “lite” version of the Nintendo Switch, one of the big takeaways - alongside the lack of TV support - is no kickstand, so it can’t even be stood up on a table. It’s got 32GB of storage, the same as the base console, and don’t worry; if you like having a truck load of games installed at the same time, the MicroSD card slot is still there. According to Nintendo, it also has a better processor, which means 20%-30% longer battery life. It still has a standard headphone jack - but no wireless/bluetooth support - but since it’s smaller, the Nintendo Switch Lite cannot be used with Nintendo Labo (sorry to disappoint those already looking for Nintendo Labo deals). In the official press release, Nintendo mention that “some games will have restrictions”, but give no details as to what they’ll include. Expect information on that prior to the console launching.

In terms of the size of the console, the original Switch measures at 102mm x 239mm x 13.9mm with both Joy-Cons attached. The Nintendo Switch Lite size on the other hand is 91.1mm x 208mm x 13.9mm, making it noticeably smaller. It will also weigh 22g less than the standard console at 275g in total. The LCD screen is 5.5 inches, 0.7 inches smaller than the original, and it doesn’t support “HD Rumble” - in other words, vibration. Nintendo has a neat “Which Nintendo Switch is right for you?” page if you’d like to compare the two directly.

In the original Wall Street Journal report about Switch production moving countries from China to Taiwan and Vietnam, it mentions there being two new Nintendo Switch consoles in production. This is only one of them and if the report comes out to be true, it likely means we can expect another Switch version at some point, most likely a more powerful one. Since it still hasn’t been officially confirmed, we’ve got no word on that yet, but we’ll write about it as soon as we do!