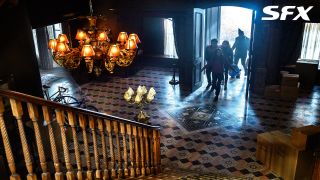 Crafting a successful new TV series can be hellish. Case in point: Locke & Key. Based on the comic book series by scribe Joe Hill and illustrator Gabriel Rodriguez, a pilot was originally commissioned by Fox in 2010; however, the network never picked it up for a full season.

Save up to 70% on an SFX magazine subscription

Have the world's best sci-fi magazine delivered to your door every month and save up to 70% on a print and digital subscription.

In 2017, Hulu disclosed it was developing a Locke & Key show. A year later, it passed on moving forward with the project. Most recently, Netflix announced it had ordered a 10-episode first season, which actually went into production this past summer. In retrospect, co-showrunner Meredith Averill believes their adaptation benefitted from all the creative labour pains.

"You can stand back and look at the two other versions and see what worked here and what wasn't working," Averill tells SFX. "What were the things we were really liking? We decided we wanted to make it more of a family drama with this coming-of-age story with our younger teen characters and focus it more on fantasy rather than horror. The comic is very much in the horror vein, which is a genre I love coming off of The Haunting Of Hill House. In many ways, it was a great training ground for this because that is a show about this family dealing with this trauma and you are unpacking the mystery of what happened to them 20 years ago."

Premiering in February, Locke & Key follows the Lockes – Nina (Darby Stanchfield) and her three children, Tyler (Connor Jessup), Kinsey (Emilia Jones) and Bode (Jackson Robert Scott) – a family grieving over the gruesome murder of their father/ husband, Rendell (Bill Heck). They consequently relocate to their ancestral home in Massachusetts. As it turns out, the house contains numerous keys with magical properties... artifacts the siblings must protect from a conniving demon.

"We are getting to most of the important 'bus stops' in Joe and Gabriel's original material," co-showrunner Carlton Cuse adds. "Joe Hill has been our partner all the way through this. Joe himself says that 'a literal adaptation would be boring. If someone wants to read the story exactly as it exists, they can pick up the comics and read the graphic novels.' He's been on board with the changes we've made. The story unfolds in a general way that is similar to what is in the books, but there are definitely things that are different. I think it will be an enjoyable experience for fans of it, as well, to see the way we've expanded the world and made changes and introduced new characters.

"We meet the family when they are on the road to Matheson, Massachusetts, which is where the Locke ancestral family is," he continues. "Through some flashbacks and exposition, we learn about the murder of Rendell and the circumstances that brought them to remake their life in this new place. We're setting up right away this family in this magical, special house. It's huge, and it's cool and ripe for exploration. That's where our tale begins."

It's a warm July afternoon when SFX arrives at the Locke & Key set. Inside Toronto's Cinespace Film Studios, a soundstage has been transformed into the Locke's generations-old manor, aptly titled Keyhouse. The main floor consists of a large, open foyer and a greeting room where portraits line the walls. Through the doorway lies a cosy chamber, complete with a piano, fireplace and the Mending Cabinet. Combined with the Mending Key, this fixture can repair almost anything. Other rooms include a study, an enormous kitchen and a basement – all spaces that hide either a key or a deep, dark secret. Upstairs, cast and crew have assembled in Kinsey's bedroom to shoot a sequence between the children.

Bode is busy playing the board game Trouble on the bed. Close by, Tyler attempts to conceal a jar behind his back. When Bode becomes curious about what his brother is up to, Tyler demands, "You get out of here."

But the youngest Locke will have none of that. "The only reason you know about the keys is because of me, because I shared them with you, so stop shutting me out," Bode says. The episode's director, Splice's Vincenzo Natali, calls "cut" and then begins to prepare for another take.

In the meantime, a quick trip to the props department reveals 12 intricate keys, with each one granting its possessor a fantastical ability. Later on, the actors cite the Anywhere Key, the Mending Key, the Head Key, and the Ghost Key as their favourites.

"The keys manifest powers," Cuse notes. "The way it becomes interesting is how these powers expose more information for the audience about the characters who are using the keys. It wasn't enough to see a key that can turn you into a ghost and make you fly. There had to be another level of resonance where we understand how that key affected the character and led to conflict and growth. For example, there's a key that allows you to manipulate other people in a certain way. On the surface, that's something that can seem fun. But, on a deeper level, there's a bigger lesson to be learned about what will come of those kinds of manipulations."

"When the kids first discover there is magic in the house, they discover that adults can experience magic, but only kids can remember magic," he adds. "They think it's super-cool to have these keys that have these powers, but with great power comes great responsibility. They have to come to understand what it means to be in possession of these keys and the powers the keys have. That's a lot of what the show is about – having the fun of seeing these keys and what they can do, and then the cost and consequences of having these objects."

One nasty piece of work menacing the Lockes is the sinister Dodge (Laysla De Oliveira). When Bode initially encounters her, she materialises as this beautiful girl trapped at the bottom of a well. But appearances can be deceiving – Dodge is anything but sugar and spice.

"At first, Dodge seems to be this friend to Bode that tries to help him," explains Averill. "By the end of the pilot, we discover she is anything but that. Dodge just wants to be let out of the well and manipulates Bode in order to get what she wants. We come to discover that it's all tied to their father's murder and what happened to their father when he was their age, and the fact that she had something to do with his murder. So, she's not only a threat to the kids because she desperately wants the keys, but it becomes a personal mission to take her down when they find out she was involved in their father's murder."

Tonally, Locke & Key comes off as more Harry Potter than The Craft. That means audiences can expect copious amounts of magical mayhem. However, the heart of the series remains the bond and relationship between the three core characters. In fact, Cuse feels that element distinguishes the show from other YA properties. "We really started from a place of, 'How can we tell an emotionally compelling story?'" he says. "We want you to fall in love with the Locke family members. If you don't, we haven't done our job. The great thing about Joe's comic, and the reason it was such a massive success, is there is this very touching story of these kids, and yet there's this incredible fantasy world on top of that. It's more common and easier to tell a fantasy story without that emotional resonance."

There's no denying that Cuse and Averill excel at world-building. Cuse's credits include Lost, Bates Motel and Jack Ryan. On the other hand, Averill helped steer Star-Crossed, Jane The Virgin and The Haunting Of Hill House. And, from the sound of it, the duo still plan to unlock – pun very much intended – loads more with Locke & Key. "Meredith and I will figure out when this thing has to end," Cuse says. "Right now, there's a lot of life left in it. We certainly had lots of conversations about keys and we didn't get to a bunch of them in season one. We are in the writers's room right now working on season two and we have a whole bunch of new ones that we are going to be introducing. "There's plenty of keys," he concludes. "We are trying to find the balance of having the fun of introducing them without overdosing the audience on them. So stay tuned."