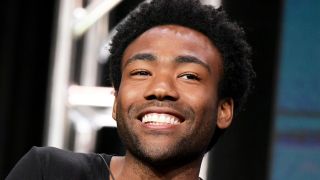 Donald Glover has finished shooting on the Han Solo movie, director Ron Howard revealed this weekend via Instagram. The actor is seen sporting a full beard along with his traditional, well-combed mustache in a selfie with the replacement director, though that appears to be all the clues we'll get from this particular set pic.

Truly remarkable #DonaldGlover wrapped up his shooting for #UntitledHanSoloMovie He brought so much fun & cool to that old Smoothie, Lando. All of us crew & cast will really miss him.

Howard is no stranger to providing teasing glimpses into the film's production, sharing photos of everything from water bottles to him reviewing footage of Chewbacca while surrounded by all manner of Star Wars merch and intriguing mysteries hiding in the background. But it would seem that this time, what you see is what you get: a bearded and handsome Donald Glover. Not that that's a bad thing.

As for the rest of the crew, they're likely still working hard to get the film to fit Howard's vision. The production has certainly suffered - previous directors Phil Lord and Chris Miller apparently butted heads with Lucasfilm president Kathleen Kennedy quite hard, and a report from June revealed that an acting coach had been hired for main star Alden Ehrenreich.

But that doesn't necessarily mean the end or a doomed film. After all, Rogue One: A Star Wars Story also suffered from setbacks during production, yet it holds an 85% certified fresh rating on Rotten Tomatoes from critics, and an even higher 87% rating from audiences. Hopefully our buddy Ron can steer this ship through the metaphorical asteroid field ahead of him and bring us all an enjoyable ride.