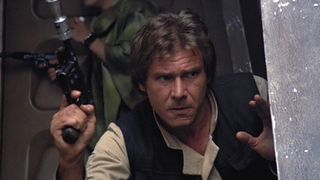 Oh boy. The Han Solo movie – fresh off the firing of directors Phil Lord and Chris Miller – has had details leaked about its tumultuous production. From hiring a last-minute acting coach because Alden Ehrenreich’s performances weren’t up to scratch, to slow work, and even 1pm starts on set, it reads like a checklist of what not to do if you’re given the keys to a massive franchise.

The Hollywood Reporter have helpfully revealed all about whatever was happening on set under directors Lord and Miller. Most notably, Han Solo, Alden Ehrenreich, himself just wasn’t impressing, with an acting coach brought in after a considerable amount of filming had already been shot.

As for the shots that had already been done? Well, apparently, there just weren’t enough of them. Lucasfilm and its president Kathleen Kennedy were not only unhappy with the lack of shots to use in the editing room, but also the pace at which everything was getting finished.

Lucasfilm expected 12-15 camera placements a day – they got 3 on the day it was decided to boot the directors. This wasn’t helped by some shoots starting as late in the day as 1pm. Try asking your boss if you can start work that late and see how you get on…

On the other side of things, Lord and Miller felt they had ‘zero creative freedom’ which is backed up by an anecdotal story of higher-ups being massively unhappy by the directors not sticking to the script and calling out lines for actors to use in scenes.

Stifled directors, an offkey lead man and a glacial pace to filming? Yeahhhh, that doesn't sound like a vehicle that's going to do the Kessel Run in less than 12 parsecs. For what it’s worth, the Han Solo movie is still slated for release on 25 May, 2018. That’ll probably come with a massive ‘SUBJECT TO CHANGE’, though.

In mitigation, there's still time for new director Ron Howard of Apollo 13, Splash and Parenthood fame to turn Han Solo from scruffy nerf herder to Alliance general – and Rogue One: A Star Wars Story's production was called into doubt, before an extensive rework of its ending led to a highly favorable critical response.