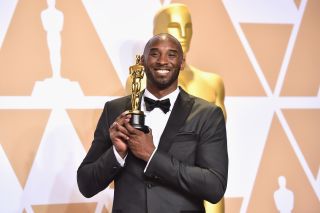 Basketball great Kobe Bryant will be honoured at this year's Oscars. The iconic sportsman, along with his daughter Gianna and seven others, died on Sunday in a fatal helicopter crash.

Bryant was an Oscar winner, having picked up the Best Animated Short Film statuette in 2018 for Dear Basketball – itself an adaptation of a poem, published by Bryant in 2015, about his retirement. When in the ceremony Bryant will be honoured remains unknown, though it's expected the basketball player will be namechecked during the In Memoriam section of the Academy Awards.

Other tributes to Bryant have included the developers behind the basketball game NBA 2K20 putting a large banner on the game's home screen. It features a simple black and white photo of Bryant with "1978 - 2020" emblazoned below his name.

This year's Oscars ceremony will be hostless. Instead, akin to the 2019 ceremony, numerous celebrities will present awards. They include Gal Gadot, Will Ferrell, Timothee Chalamet, Mark Ruffalo, and Zazie Beetz. Last year's acting winners – Olivia Colman, Regina King, Mahershala Ali, and Rami Malek – have also been announced as presenters.

The Oscars 2020 will take place on Sunday, February 9. We will be covering the event extensively, and, in the meantime, you can read our Oscars 2020 predictions.