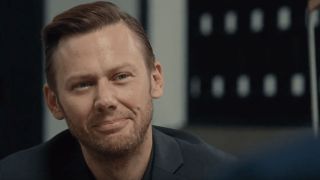 Well. That was certainly a trip. Westworld season 2 isn’t letting up with the mind-messing and general confusion. Things were stepped up a notch this week, though, with a few plots coming full circle, characters being stuck in their own personal hell and, yes, everything was still very confusing. Spoilers for Westworld season 2, episode 4 follow…

Was anyone else getting flashbacks to Desmond in Lost? Dear Daddy Delos being trapped in an observation wing while William tried to perfect the replication of Jim Delos was beautifully shot and, yet, tragic in execution. It opens up a whole bunch of questions as to what is really going on beneath the surface, too.

James Delos after read the letter. #Westworld #WestworldSeason2 pic.twitter.com/eXG74p5M5114 May 2018

"I can't tell if this is now or then"

Trust Bernard to sum up the whole show in one sentence. I had a bit of a moan about multiple timelines last week but the show actually giving us some plot-based reasons for flitting back and forth made a lot more sense this week. Now, we just need to figure out when we are, and the whole mess will be solved – right?

Bernard has no idea if his memories come before or after the others. Welcome to the world of #Westworld viewers.14 May 2018

Elsie telling Bernard he doesn’t know his memories in order..... is that representative of this season because I feel Bernard on a spiritual level. The confusion is real. @WestworldHBO #WestworldSeason2 #Westworld14 May 2018

Bernard's gonna need one of these to separate what's reality and what's memory. #Westworld @jfreewright pic.twitter.com/Z2ir31aJ5714 May 2018

So Bernard's fucked up memory storage is the reason for the fluid timeline this season? #Westworld14 May 2018

Logan Delos is dead. Don’t take my word for it, take it from William who, uhh, not only lied about his daughter’s death (we’ll get to that in a moment) but revealed, offhand, that Logan died from an overdose some years back. Is that true? Are they hiding another similar pod with Delos Jr. too? No one knows, but we’re all still sad about Logan’s supposed ‘death.’

Logan just died of an overdose?... Offscreen?... One of the main characters from last season just dies just like that... nah #Westworld pic.twitter.com/zB4KzKH40614 May 2018

My feeling when the Man in Black revealed to the James Delos host that Logan died from an overdose years ago. #westworld pic.twitter.com/E1vvxmwJJA14 May 2018

The Man in Black stays his course... and meets a familiar face

The Man in Black’s narrative this episode felt like just more of a reason to show how great of a gunslinger he is – something we’ve already seen countless times – but after cleaning up one mess, he stumbles into another. The girl from Park 6 appears in the distance and… she’s William’s daughter. Maybe. Who knows anything anymore?

The Man in Black must have read all of the walkthrough guides and got all the cheat codes. He’s so damn smooth with it. #Westworld14 May 2018

Another 10/10 episode. There isn't a better character than the Man in Black on TV at the moment #Westworld14 May 2018

Flipping from Bernard and his fragmented memories to Old William and his boring maze quest with the old west hosts was FRUSTRATING #westworld pic.twitter.com/8cBv7El82u14 May 2018

Ah! So the woman that avoided getting shot, outran a tiger, fell off a cliff with the tiger, the tiger died, and she escaped a pack of wild Indians is the daughter of the man in black. That explains her escapism.#Westworld14 May 2018

Confusing as ever? Hell to the yes!

Right. So, if you’re scratching your head and wondering what you just watched over the past 72-minutes then, fret not, you’re not alone. There are so many moving parts – half of them broken beyond repair it seems – that you’re going to need to rewatch every episode at least seven times before you have any idea what’s going on.

Man. The new ep of #Westworld totally drained me emotionally. Stuck in a state of awe for over an hour, took a few deep breaths after. The episode before was mostly eye candy, but this one struck harder than most TV in recent memory.14 May 2018

After all that, you’re going to want to read our big question for Westworld season 2, episode 4 to try and make sense of things. It’s a doozy.