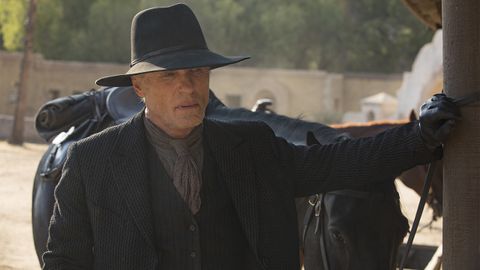 Episode 4 moves the season 2 story forward in a big way, making room for new mysteries by answering some major questions from season 1.

Three episodes in and we’re no closer to understanding what’s going on in Westworld season 2. Not really. And while there’s been a few enjoyable revelations and fan-pleasing moments, things so far have been rather… tame? (Now, there’s a word I never thought I’d use to describe Westworld!) I don’t mean in terms of the violence of course - season 2 is just as bloody and brutal as the first - but so far the series has lacked the gripping complexity of the first season, which made it truly unmissable TV. Thankfully, I’m happy to report that episode 4 - The Riddle of the Sphinx - is kicking things into high gear and reminding us why we loved this show so much in the first place. Get ready for action, horror, and even some answers about the true purpose of the park… yes, really!

Note: From here on out there are plot spoilers for Westworld season 2, episode 4 - The Riddle of the Sphinx.

Last week, I said “the opening sequence of episode 3 is one of the best we’ve ever seen” and I stand by that, but the beginning of episode 4 is also brilliant and completely different to anything we’ve seen from the show so far. We join James Delos in an observation room, which would look more at home in Legion than Westworld. Far too white, and far too enclosed, he’s clearly being kept in quarantine due to his illness which we discovered during a flashback in a previous episode. As it turns out though, it’s not James Delos at all, but a Host version of the businessman who died from his illness quite some time ago. Yep, that’s what DELOS has been up to - trying to create Host versions of real humans so the rich can live forever. While it’s not the most surprising of revelations - anyone familiar with Joss Whedon’s Dollhouse, Netflix’s Altered Carbon, or indeed any number of sci-fi series surrounding AI and human mortality will have seen this plot point coming a mile away - the episode quickly moves onto the much more interesting fact that they’ve not cracked it yet. Host James Delos is glitching and over the number of years in which William becomes the Man in Black, DELOS’ experiments with its former owner’s consciousness continue to fail time and time again.

Who is the memory ball Bernard stole for?

This storyline comes paired with Bernard’s - the Bernard from the time shortly after the events of the gala, I should clarify - who Clementine has dragged all the way to the middle of nowhere and deposited at the feet of Elsie. Yeah, Elsie is back and, as you might expect, she’s none too pleased with Bernard. After some explanations and a little bit of mutual dependency, the pair break into a lab nearby which - shock, horror - is the same lab Host James Delos was being kept in. Amongst the killed lab technicians and destroyed equipment they find the latest James Delos Host, which the Man in Black left to degraded into madness after his last visit and, oh look, he’s trashed him apartment, killed his minder, and started cutting on himself like that chick from the Evil Dead remake. Welcome to the horror movie Westworld! With the dark red lighting and the knowledge that there’s no telling how long the Host has been left to his own maddening devices, it’s a very effective and chilling sequence, which is over far too soon for my liking. Peter Mullan puts in a horrifying performance (in a good way) as the mad Host and it’s shame he wasn’t given more screen time. I definitely wanted to see him break out of that lab and run rampant around Westworld dishing out his own form of gruesome torture. That’s not the only thing of note which happens during this sequences though - seriously, it’s impressive how much the showrunners pack into this episode! While in the lab Bernard has another flashback and not only realises that he’s the one who killed all the technicians and destroyed the lab, but that he also took one of the ‘memory balls’ - for want of a better phrase - which were used to implant James Delos’s memories/consciousness/however it works into the Host bodies. Who is that for I wonder? *cough* Ford *cough*

Also along for the ride this episode is the Man in Black and Lawrence who come into conflict with the Confederados Teddy let go in the last episode. Their storyline is pretty inconsequential except for the fact that it marks the beginning of a change in the Man in Black. At first, the Man in Black isn’t too concerned with that fact that the Confederados are tormenting the people of Las Mudas, but after a while it starts to get to him. Ultimately, he ends up sacrificing his alliance with them to help the common folk, which is a very non-Man in Black thing to do. He’s nowhere near a white hat (yet), but the very fact that he makes a decision which could jeopardise his ultimate endgame tells us a lot about how his character might change in the future. Is it the fact that he finally found his Dolores at the end of season 1 once she remembered who he really was? Or maybe now the stakes are real for him, he’s starting to see that they’ve always been real for the Hosts? Either way, it hints at interesting developments for this characters. And that’s not all - his daughter (AKA, the woman who escaped imperialist India World in episode 3) has found him! Again, this is a revelation some will have seen coming and Katja Herbers’s Grace - one of the most interesting things about season 2 so far - only appears in this episode long enough to entice us even more, but boy, it was enough! More of the Daughter in Black please.

An incredible amount is packed into The Riddle of the Sphinx, but whether it’s pushing the story forward by revealing the true purpose of the park, or instigating changes in some well-known characters and introducing new ones, it was needed. This episode will remind fans why they couldn’t stop talking about season 1 and, sadly, I think it’s only helped by the fact that Dolores and her so far uninspiring season 2 storyline is absent. The fact that some seemingly huge revelations happen in this episode is surely a good sign as well. It might feel a little early to be spilling all of Westworld season 2’s secrets, but that might indicate that showrunners Jonathan Nolan and Lisa Joy have something else hidden up their sleeves. Something we hopefully won’t see coming. We’re not even halfway through the new season yet and most of the major questions we had after season 1 have been answered. Fingers crossed this means the second half of the season will be taking us into exciting territory unknown...

Episode 4 moves the season 2 story forward in a big way, making room for new mysteries by answering some major questions from season 1.