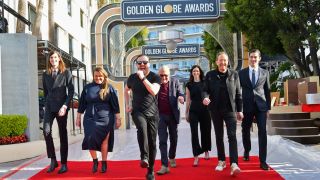 It's the first big awards event of the year and we're here to make sure you don't miss a beat with our guide on how to watch the Golden Globes online live stream or TV broadcast from anywhere in the world.

The Golden Globe Awards 2020 is taking place tonight at 5pm in LA (8pm ET, 1am GMT and 12pm AEDT). But you'll want to tune in a few hours before if you want to see the red carpet entrances and interviews too.

Once everyone's inside, Ricky Gervais will be running the show for the fifth time and will be surely making Hollywood's stars nervously shuffle in their seats awaiting one of his acerbic or sardonic remarks. We wonder what he has to say about the final season of Game of Thrones - Kit Harrington's nomination for 'Best Actor in a TV series: Drama' (yes, really) seems almost too easy an opportunity to let rip.

Speaking of who's up for what, we've rounded up the full list of Golden Globes 2020 nominations if you're interested. We'll get to see the like of The Irishman (one of the stars of our best Netflix movies list for sure) and Joker duke it out ahead of the Oscars. For the TV nominations, we've had a particularly strong year for comedy with awards magnet Phoebe Waller-Bridge being a strong favorite with a selection of nods for Fleabag. Could Rachel Brosnahan and The Marvelous Mrs. Maisel steal the show though? We're big fans of both as you can see on our best Amazon Prime TV shows list.

Let's get down to it though so you can get your viewing party sorted on time. These are the best options to watch a Golden Globes live stream from any country in the world.

Good news US viewers, you can get a Golden Globes live stream for free directly from the ceremony's official website. If you'd prefer to watch on live TV, the NBC channel will be showing the live broadcast.

The NBC website will also be showing a live stream of the Golden Globes. So if for some reason the official website is being slow or it crashes due to high traffic levels you can use this one as a backup.

If you're in the market for some extra channels on your cable TV package, you might be interested in some of the options below. Many of them come with a free trial for a bit of try before you buy action to get a feel for its range of products and channels.

If you're in Canada and want to watch on TV, then simply head on over to CTV for a live broadcast of the whole event 8pm ET/5pm PT. If you're not at home though or the TV is occupied by a family member who hasn't grasped the importance of you seeing who takes home a Golden Globe Award as it happens, then you can watch a live stream on the CTV website.

You will need to sign-in to the website and select your TV service provider to get access via this method though, so be sure to log on a few minutes early if you don't want to miss out on the opening scenes.

How to watch the Golden Globes live stream in the UK

Wait...what? No UK network has decided to pick up coverage of the Golden Globes this year. But that doesn't mean you can't watch the show. If you don't mind a 1am start tonight that is.

We recommend using a VPN to get around this by changing the location of your laptop or other viewing devices to one of the above options showing the Golden Globes live stream for free.

We'd recommend Express VPN, as they're our top-rated VPN service with a range of server options for accessing geo-locked content around the world and also for bulking up your devices' security and privacy settings at home or when using public WiFi. There's a great offer on at the moment where you get 3-months free and save 49% on a subscription too.

How to watch Golden Globes live stream anywhere in the world

With only a select few countries showing official broadcasts on live TV, chances are if you're not in the US or Canada, you're going to need a VPN to watch a live stream of the event on your smart TV, laptop, tablet or mobile phone.

If you do live in a country that is showing the Golden Globe Awards 2020 but are out of the nation on holiday or on business then a VPN can get around the geo-restrictions and allow you to enjoy a live stream from the options mentioned above just like you're back at home.

Thankfully, there are lots of VPN providers out there and we've tested a wide range of them on our best VPN for gaming guide and found that ExpressVPN not only comes out on top for gamers but regular users too. It has the best selection of reliable server locations to connect to around the world along with reassuring privacy options. We especially love how the app can be set to automatically protect you on any public WiFi, making browsing and shopping online less risky at a cafe or on public transport.

Follow these simple steps to get set up within minutes to get ready to watch the Golden Globes online:

2: Connect the server to the relevant location
So for the Golden Globe Awards, that would be anywhere in the USA. A New York server is usually the default, but you can pick any of the US city suggestions it offers.

3: Head over to a website showing the Golden Globes live stream
The best options we've found so far include the official website, NBC and even the official facebook page.