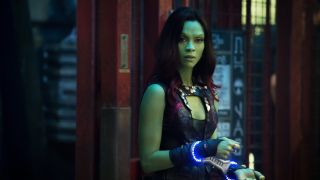 How will the Guardians of the Galaxy get along with the Avengers when the two teams meet up in Marvel Studios’ Avengers: Infinity War? According to our interview with star Zoe Saldana, you’ll need to tap into your knowledge of ‘80s comedies to understand their dynamic.

It may seem like a strange comparison at first, but I can totally see the Guardians as the MCU’s equivalent of Randy Quaid’s Cousin Eddie in the Vacation movies: uncouth, a little grimy, unafraid to say whatever happens to be on their mind at any given moment.

Even though the next two Avengers movies are probably going to involve some serious destruction from Josh Brolin’s mega-baddie Thanos - including the potential deaths of some major Marvel characters - I can also foresee some hilarious interactions between motor-mouthed characters like Star-Lord and Rocket chatting it up with more buttoned-up types like Captain America or Black Widow. And don’t get me started on the comedic potential of Drax and Tony Stark being in the same room.