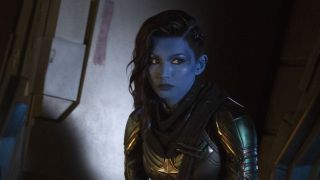 The Eternals are looking to bolster their ranks. Next in line to join the forthcoming Marvel movie’s cast (which currently includes the likes of Angelina Jolie, Richard Madden, Kumail Nanjiani, to name but a few) is Gemma Chan. You might just recognise that name because, yes, Chan has superhero movie experience, having already starred in Captain Marvel, which came out earlier this year. However, she’s not playing who you think she might be playing.

According to Variety, Chan is being lined up for an unspecified role – though certain fans think the British actress would be a perfect fit for the character Sersi – and sources indicate that she’ll be playing a different character to the one she previously portrayed in the Marvel Cinematic Universe.

In Captain Marvel, Chan played Minn-Erva, the Kree warrior. If the actress appears in a second Marvel movie as a different character, that would mark the first time that has happened.

Of course, actors playing the separate characters in the same franchise has happened before. Doctor Who, famously, is rich with actors who turned up in minor roles, only to take centre stage as another character further down the line. Peter Capaldi, the Twelfth Doctor himself, and Eleven companion Karen Gillan originally appeared in minor roles in the same episode during David Tennant’s run as the Time Lord.

The Netflix Marvel shows, meanwhile, have had Mahershala Ali as Cottonmouth and Alfre Woodward as Mariah in Luke Cage – Ali will play Marvel’s new Blade in the coming years, and Woodward previously starred as the grieving mother who confronted Iron Man in Captain America: Civil War.

If you can ignore the disconnect there, it shouldn’t be a problem when Gemma Chan appears in The Eternals, which reaches cinemas November 6, 2020 and will be the second movie in Marvel Phase 4.

Find out more about the Eternals and their motivations with our deep dive into the comics.