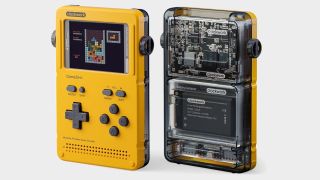 If you long for those halcyon days of the late '90s when the apex of portable technology was a rectangular grey brick with a sickly green screen, Clockwork LLC may have just the tonic for your nostalgia. GameShell ($159 over at Amazon) is a vivid yellow, portable console that immediately calls to mind Nintendo's first handheld megastar. It's also angled to appeal to the builders, tinkerers, and hackers who might've dipped their toes into Labo but come away disappointed with how surface level the construction elements and games were.

GameShell is built around a system on a chip (SOC) called ClockworkPi, basically a circuit board with a bunch of computer components soldered onto it. It's got a little quad core processor, onboard Wifi and Bluetooth, and a a gig of DDR3 RAM, enough power to handle the games you remember so fondly from your youth (assuming you grew up in the late 80s and early 90s). It's even got a Micro HDMI output, so you can send gameplay to a TV/monitor or, if you're a crazy person, turn the GameShell into a tiny Linux machine by attaching some Bluetooth peripherals.

Mostly, though, the GameShell is designed to play retro games; their marketing unabashedly advertises the ability to load it up with ROMs and it comes preloaded with a couple of games (Cave Story and Freedom) and a GBA emulator. It's a perfect home for everything through roughly the SNES era, or for some of the current batch of retro-inspired platformers. It sports a solid-if-not-crystal-clear 2.7 inch screen and a fun, easy to hold default chassis, but to start playing you first need to assemble the GameShell itself.

The DIY appeal is obviously a huge selling point, and the build process was relatively simple. Constructing the GameShell was like baby's first Gundam, a process not that wildly different from putting together a Labo (the difference being the immense amount of potential customization and huge range of use cases the GameShell offers). Like a Gundam, you snap most of the smaller pieces out of a plastic sprue (and cut away any additional plastic molding with an exacto knife) and pop them into place on the board. The chassis then snaps together around it and holds everything in place. There are no screws, bolts, or other connectors to worry about losing or carefully securing in place, and everything locks together snugly.

Beyond potentially hosting a massive emulated games library, the GameShell also supports a number of programming languages, stuff like Python, LUA, and LISP. If you're sick of playing with existing ROMs,  you can tinker with game code or even build your own games if you're so inclined. If you're looking to introduce some younger minds to coding or some basic physical modding, the GameShell is a cute, accessible entry point. But even if you just want a cool Game Boy-alike to play retro games (and that can also function as a wireless speaker or a programmable remote with a little extra effort), at $159 the GameShell is a pretty appealing option.