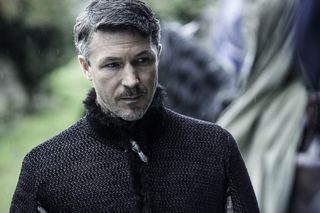 Now that Game of Thrones has started to divert from George R.R. Martin's novels, each episode in season six is a genuine surprise for every type of fan. It doesn't matter if you've read the books anymore; the showrunners are marching their characters off the page into new territory.

This fresh batch of promo pics released by HBO prove that point further, giving us a look at what's to come in episode 4 "Book of the Stranger." First up is a glimpse at Theon's homecoming with his sister Yara in Pyke:

Look, it's Littlefinger! Petyr Baelish is back for his first season six appearance, and as usual bears a cold, calculating expression.

The fourth image shows Tyrion in Meereen, standing before the Unsullied and looking none too happy about it.

Dario and Jorah are eyeing up something in the distance... could it be they're gonna bust out Dany from the first wives club?...

... and by the look on her face, she'd probably be quite happy to never hear another tale about scrubbing stubborn bloodstains from a Khal's jockstrap.

Game of Thrones S6.4 airs on Sunday, May 15 at 9pm on HBO, and a day later on Sky Atlantic in the UK. Be sure to read our season 6 recap if you need a refresher before even more Westerosi squabbling kicks off this weekend.