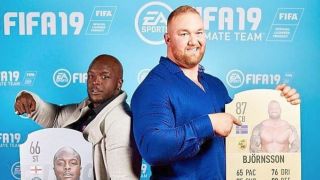 Gregor ‘The Mountain’ Clegane survived expulsion from the Riverlands, poisoning by Oberyn Martell and all manner of Qyburn experiments as one of Game of Thrones' most popular, and beastly, characters – but the always rabid FIFA 19 community may be another challenge entirely.

The beast-man all GoT fans love to hate is now the proud owner of his very own Ultimate Team card, as revealed by another larger-than-life personality: Wycombe Wanderers centre forward Adebayo Akinfenwa. Actually, that’s a slight fib. It’s Clegane’s real-life alias, Icelandic actor Hafþór Júlíus Björnsson, who’s been rewarded with his own card.

While Akinfenwa was the man who revealed the news, it came with a friendly pop at Björnsson’s attributes. “They made The Mountain a CB [centre back],” he wrote on Instagram. “What a clash this would be – [but] how they gonna make him quicker than me?” Björnsson’s Pace rating is 65, way ahead of the miserly 44 awarded to Akinfenwa for the same attribute.

An 87 overall rating may seem preposterous, but Björnsson does boast genuine sporting pedigree. He played for four top Icelandic basketball clubs between 2004 and 2008, racking up 32 games for his country’s junior national team. He’s also won the Europe’s Strongest Man contest four times, and the World version once, in 2018.

FIFA players responded with similar humour to Akinfenwa’s, largely mocking the way in which this year’s game has downgraded speed – particularly when it comes to slow defenders chasing fast strikers.

“He'll go up for a corner and then beat TOTY Mbappe's counter attack from box to box,” wrote Shevchenko7cfc on Reddit.

“Next EA promo: Game of Thrones special cards with TOTY stats,” wrote KiteTroll, drawing the following brilliant response from fellow forumite Shifty18: “I'd take that over some of the current garbage. Jaime Lannister GK: golden glove, but terrible handling.”

Mercifully, the card is custom-made for Björnsson, and so won’t be available for public use. Akinfenwa’s, however, can be nabbed for a princely 300 coins.

Currently planning your end-game squad in FIFA 19? While you can't add Björnsson, we've profiled six affordable legends who are readily available in our guide to FIFA 19 Icons.