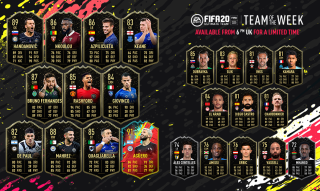 Welcome to the FIFA 20 TOTW 18 and the first ever record breaker card in the game! Sergio Aguero earns a whopping 91 rating with the brand new record breaker design, which looks vibrant and flashy. Aguero earns this special card in FIFA 20 as a result of him breaking two records over the weekend; highest scoring foreign player in the Premier League and most hat-tricks in the Premier League, thanks to hitting the net three times against Aston Villa. Here's the rest of FIFA 20 TOTW 18, because you'll have to be seriously lucky to unpack Aguero!

The @premierleague ⭐️ shine brightly in the #TOTW 18!Available in packs at 6PM⏰UK 🇬🇧 pic.twitter.com/4iw2dpgIaIJanuary 15, 2020

Following on from Aguero with an 89 rating is Samir Handanovic after the Inter keeper saved a penalty from Muriel to keep the score at 1-1. Aguero's teammate Riyad Mahrez also features at 88 for his performance in City's 6-1 win over Villa, since he got two goals and an assist. United fans will be happy to see potential new signing Bruno Fernandes in there with an 87 rating, along with their inside forward wonderkid Marcus Rashford at 85. Here's the complete FIFA 20 TOTW 18, in packs from 6pm GMT today (January 15):