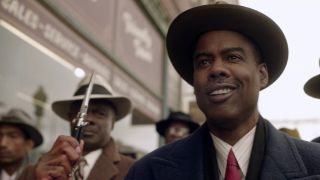 The Fargo season 4 trailer is here, and it's all about warring gangs in Kansas City in the 1950s, so prepare for some seriously tense situations. This latest season takes the action the furthest away from Fargo yet, with Chris Rock leading a Black gang trying to navigate a shaky relationship with the Italian mob. Check out the trailer below.

From the trailer it's clear that Fargo won't ignore the obvious racial tensions of the time period, but the plot seems to ring with a cleverly modern tone. "They're the past," Rock's character Loy Cannon says about the Italian Mafia. "We're the future. They just don't know it yet." As if to drive that point home, a Mafia member follows that line with, "We're the god damn Roman empire." A scene later on where a string of rats hangs over an Italian gangster's head as "warning to the other rats" further shows that this gang takes some seriously antiquated approaches to crime.

It also seems like Loy Cannon's gang is the same one from which season two's Mike Milligan hails. Expertly played by Bokeem Woodbine (it earned him an Emmy nom for Best Supporting Actor) Milligan was as philosophical as he was dangerous, always ready to talk his way into and out of violence. Fargo season four may be giving us a look into his gang's origins, as it takes place some twenty years before we meet Milligan.

Expect a ton of jazz, drugs, and violence in the newest season of Fargo, which airs April 19 on FX and Hulu.

Good TV lies ahead of us, with a Parasite TV adaptation coming to HBO sometime soon.