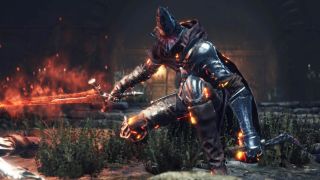 You may not realize it, but playing through a demanding game like Dark Souls 3 is at least as much of a feat of manual dexterity as it is of skill and persistence. Tenths of a second on a button press could be the difference between rolling around for a perfect backstab or tumbling off a cliff. It's second nature for seasoned players, sure, but imagine doing all that with your feet while hosting a Twitch broadcast.

Twitch streamer Rudeism has made a name for himself by playing games "wrong," and finishing Dark Souls 3 may be his crowning achievement… if his feet can ever take him there. He's definitely doing better than that guy with the voice controls, at least. Next he should try it at level 1 with no armor or dodge rolling.