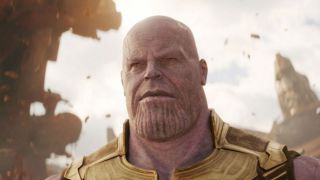 “Thanos will return…” said a title card at the end of Avengers: Infinity War, but is there life for the Mad Titan after the events of Avengers: Endgame?

If you were expecting to do a bit of detective work based on the number of films in Thanos actor Josh Brolin‘s Marvel contract, unfortunately you’re going to be disappointed. Because while many MCU fans believe they worked out the fates of other MCU heroes based on the length of their real-world deals (we're saying nothing about the events of Endgame here!), it seems contracts are rather more as-and-when when it comes to wielders of Infinity Gauntlets...

“Ten. For the next ten years, doing one a year. Kevin Feige [MCU kingpin], by the way, you hear that?” Brolin joked in an interview with Variety before admitting: “I’m on a one movie to one movie basis, so we’ll see what happens after this movie.”

Luckily for fans of giant purple aliens with a penchant for turning half the population of the universe to dust (they exist – believe us), Brolin enjoyed playing the biggest antagonist the MCU has ever known.

“It's fun, man,” he admits. “The thing is, I thought it was like a voiceover, and it’s not. Everything was practical. Every scene was with everybody who I had scenes with. They got the little idiosyncrasies, which were all stuff that we created, and it’s a character who turned out to be sympathetic that nobody thought would be sympathetic, and that was really nice. It turned into a multi-dimensional character and nobody thought it was supposed to be.”

Prequel? Sequel? Spin-off TV show? How would you like to see Thanos return? Let us know in the comments below.

Avengers: Endgame is in cinemas now.