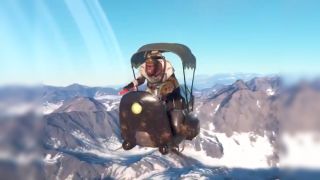 Beyond Good & Evil 2 didn't disappear after its impressive (and very long-awaited) debut at E3 2016, but most of the updates from the developers since then have been pretty low-key: concept art, bits of lore, that kind of thing. The creators will peel back the veil a little bit more with their second "Space Monkey Report" live stream on Thursday, and it should be something to look forward to for just about any kind of Beyond Good & Evil fan. Unless you're hoping for a sequel to Nietzsche's philosophy book… I don't think the stream will have much for you in that case.

Where can I watch the Beyond Good & Evil 2 live stream?

I got you, space-pirate buddy. You can watch the Beyond Good & Evil 2 live stream right here as soon as it begins. Or stay glued directly to Ubisoft's Twitch channel if you prefer.

When can I watch the Beyond Good & Evil 2 live stream?

Do you want to know what the dev team and Space Monkeys have been up to since our last live stream? Join us for our second SMP Report live stream tomorrow!May 3rd, 6 PM CEST / 12 PM EDT / 9AM PDT👉 https://t.co/0RpV2ALE6k 👈 pic.twitter.com/lqz5KFkvihMay 2, 2018

The stream will begin on Thursday, May 3rd at 9am PDT / noon EDT / 5 pm BST. Ubisoft didn't say how long we should expect the stream to go, but the last one went for just over an hour.

What will the Beyond Good & Evil 2 live stream be about?

Ubisoft hasn't revealed what the focus of the second Space Monkey Report will be, so… I dunno. But! We can take a look at some of the highlights from the previous stream to give us a clue of what kind of things we may see this time. Here's a neat look at the character creation system used to make human-animal hybrid characters:

SMP Report Live Stream: Hybrid Morphing Demo video incoming! Sign up to be a Space Monkey at https://t.co/K3KJf86qYZ and help shape the development of #BGE2! pic.twitter.com/kXiALTphEMDecember 21, 2017

And here are some of the vehicle designs that were on show. I love the juxtaposition of idiosyncratic, weathered designs and modular construction!

As seen during our SMP Report Live Stream, this tech demo shows off some of the ships and vehicles currently being developed for #BGE2 . Visit https://t.co/K3KJf86qYZ to become a Space Monkey and inspire the team! pic.twitter.com/gEeViS1VcIDecember 22, 2017

There was also a loooot of talking. But as long as there are a few tantalizing morsels like the above, it should be worthwhile. And let's be real, Michel Ancel's accent is cute is hell, so it should be worth it for that alone.

Still not sure about this new direction for BG&E? Read our argument for why Beyond Good & Evil 2’s big changes point to a perfectly authentic sequel.