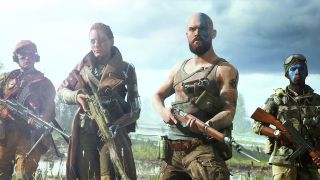 Update: EA has updated the post on its official website to say that Battlefield 5 Grand Operations will in fact be available at launch, contrary to its previous statement. The mix-up likely comes from the fact that Tides of War, Battlefield 5's season-based content update plan which will include new Grand Operations, will itself begin sometime after launch. Good news all around!

Original story:  Battlefield 5 has big ambitions to change up the 16-year-old shooter series, and its new Grand Operations mode might be the most daring of all. Unfortunately, you won't be able to play it right when the game arrives. Electronic Arts and DICE revealed that Grand Operations will go live "shortly after launch" in a post on Battlefield 5's official website. The mode has been featured prominently in BF5's pre-release announcements and trailers, so this is kind of a bummer all around (even if it's better to get something late than all buggy and awful).

If you're not familiar with the concept, Battlefield 5's Grand Operations are a sort of uber-multiplayer that meld together new and classic Battlefield modes. For instance, one Grand Operation starts out with the Allies parachuting into Axis-occupied territory, seeking to destroy a set number of anti-air cannon emplacements. If the Allies complete their objective, they'll have an advantage in the next round, which will play out with different objectives and potentially a new map. If neither side reaches a decisive victory across multiple in-game "days," it can even end in a no-respawns war of attrition to be the last side standing.

In other words, Grand Operations are like Battlefield 1 Operations, but grander - more varied objectives, more areas, more potential for that good ol' Battlefield mix of cinematic action and oddball antics. It's too bad we won't be able to play them immediately when Battlefield 5 goes live on October 19 (or earlier if you have EA Access or buy the deluxe version), but at least "shortly after launch" doesn't sound like it will be too long. Like, probably less than a month, right? Maybe a week and a half? I don't know.

Battlefield 5's Tides of War - think Fortnite seasons rather than DLC expansions - are set to go live a month after the game launches, so hopefully Grand Operations will be humming along and ready to receive some new stuff by then.

See how Battlefield 5 is learning from Fortnite and Destiny in its bid to be the only shooter you'll need this year.