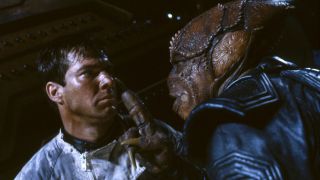 At this time of brotherly love, peace, and good will to all men, there are surely few more appropriate SF movies to watch than Enemy Mine.

Directed by Das Boot’s Wolfgang Petersen, this 1985 film centres on a human pilot (played by Dennis Quaid) and an alien “Drac” (Louis Gossett Jr) who, after a dogfight in space, both crash-land and are stranded on an uninhabited alien planet. Over the course of the film they realise that in order to survive they must collaborate, learn about one another’s languages and cultures, and form a powerful bond.

Eureka Entertainment released a Blu-ray of Enemy Mine back in June, complete with subtitles, deleted scene, trailer and booklet.  Now they’ve followed that up with a new dual-format Blu-ray/DVD edition in swanky SteelBook packaging. Exclusive to retailer Zavvi, it’s available from Boxing Day.

We have five copies to give away. To put your name in the hat for the chance to win one, just answer the question below!