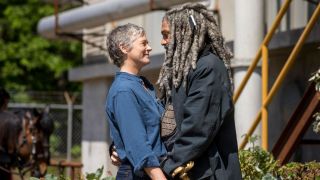 The more things change, the more they stay the same, right? Wrong. The Walking Dead season 9 aims to blow that notion out of the water with some new images (via EW), which not only show new personal relationships, but also some fresh locales for fans to get excited about. Did somebody say museum field trip?

The big news for fans and shippers everywhere is that these images seem to confirm Carol and Ezekiel are an item (sorry Caryl fans!), with the ruler of The Kingdom having seemingly found some happiness after, y’know, most of his citizens were mowed down in cold blood. That’s without even mentioning Shiva. The poor guy needs a break – and he appears to have found one judging by the loved-up pair cooing over each other.

Elsewhere, there’s plenty to talk about. Sanctuary is back, but it looks far different to the dingy complex which Negan ruled over with an iron fist. The Walking Dead, never one to subtly introduce metaphors, is literally introducing some light to the base, too.

But that doesn’t mean we’ll be sticking to the tried-and-tested formula. A couple of photos suggest that the gang are eventually going further afield, with a museum being the focal point of one of the Alexandrians’ adventures. There’s even a weird set-piece showcasing a wagon being pushed down a large set of steps. What could that possibly be about?

There’s also some new looks abound. Gabriel has a nifty new hat and Rick, who we’ll be saying goodbye to very soon, is looking less like a grizzled man-beast and more like a man who has finally found some peace. All in all, plenty to look forward to when The Walking Dead season 9 returns on October 7, 2018.

The Walking Dead season 9 is one of many new TV shows headed your way in 2018... though it's probably going to be the most heartbreaking.