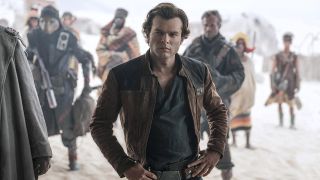 Solo: A Star Wars Story aims to bring Han Solo back to his roots.

"I’ve flown from one side of this galaxy to the other," the charming smuggler tells Luke Skywalker in the original Star Wars. "I’ve seen a lot of strange stuff, but I’ve never seen anything to make me believe there’s one all-powerful Force controlling everything. There’s no mystical energy field controls my destiny."

This is the voice of a cocky, cynical man who relies on himself and trusts no one (apart from his Wookiee friend, of course). And it's that version of Han that father-and-son writing team Lawrence and Jonathan Kasdan want to bring to the big screen this May, they recently told our sister publication SFX magazine.

A different type of Wild West

"For me, one of the most irresistible moments in A New Hope was that there was one of these characters hurtling through space who thinks that the Force and the Jedi are a bunch of mumbo-jumbo that he’s heard about, but doesn’t believe in," said the elder Kasdan, who served as screenwriter for 1980's The Empire Strikes Back. "It turned out that all the movies after that had to deal with the Empire and the Force and the Jedi and everything, but I was looking for the escape hatch. Where do we get to have the fun of this galaxy?"

Lawrence's son Jonathan elaborated: "We’re not dealing with the spiritual side of Star Wars. It’s about a set of concerns that I think are relatable to all people, but are specific to movies like Westerns and crime movies, where people are out for their own very specific ends. We felt we could do a fun, crime-movie Western, and "Han was a cool character to put in the center of it. That was an attractive protagonist."

And the Kasdans don't just mean attractive from a writing standpoint either. While Han was a bit of a puckish rogue in the original trilogy, stealing kisses from Princess Leia and using his smoldering stare to make audiences' hearts go pitter-patter, Solo: A Star Wars Story may be the most explicitly romantic of the Star Wars movies yet. Jonathan Kasdan claimed that the new trilogy of films were handling the topic of romance "cautiously," while he and his father wanted to embrace the idea.

"Han is the least chaste character in the Star Wars saga, so we saw making a young Han movie as an opportunity to really deal with a romantic and sexual relationship where he’s truly attracted to a woman and it’s a big part of the dynamic," Jonathan said.

That woman is Qi'ra, played by Emilia Clarke. Yes, the woman who plays Daenerys Targaryen on Game of Thrones is trading in her fantasy dragons for sci-fi spaceships. Solo will be her second stab at the genre since 2015's Terminator Genisys, where she played a young, alternate-timeline Sarah Connor. "The relationship between Han and Qi’ra is as essential to the movie as anything - it’s central to that exploration of what is driving Han, what he’s searching for and what keeps him looking for the next big score."

Aww, see? Han has always been a softie at heart. Of course, we know he eventually ends up with Leia, so here's hoping Qi'ra doesn't meet a similar fate as the characters we met in the last Star Wars spin-off, Rogue One.

Bumps in the road

The other new face is, of course, the one replacing Harrison Ford as the titular hero: Alden Ehrenreich. The 29-year old actor is still a relative newcomer to Hollywood, with a feature film debut in 2009's Tetro. Ehrenreich has been criticized for his acting skill (or reportedly, lack thereof), but the Kasdans don't sound worried.

"[Han is] a very different person 10 years earlier than he is when we meet him in Mos Eisley. So in a way it was easier and better to think of him as a different performer altogether," Jonathan told SFX. "Once Alden emerged as the guy, it was early enough in the process that a lot of the scenes that were written and rewritten with Alden’s voice very clearly in mind.”

Likewise, Jonathan wants to assure fans that the last-minute change in directors - from Lego Movie leads Phil Lord and Christopher Miller to Arrested Development executive producer Ron Howard - is nothing to worry about.

"I would say the movie hasn’t changed tone," Jonathan said. "Obviously nobody wants to be in that situation, but it’s been an interesting developmental thing for the movie. Larry [Lawrence] and I worked on the script for nine months. Then Chris and Phil came in and brought all of their ideas, and humor, and thinking outside the box, and all the things you’d expect from those two guys on the script, the story, the casting and the design of the movie. It’s infinitely better for that contribution."

"Then Ron came in with his own distinct, very specific point of view too, and an enthusiasm for the material. So it’s like it got another draft on top of that, but I think none of the virtues that Chris and Phil brought to the movie were lost. I think ultimately the movie that you’ll see is truly a product of the five of us all coming together in this weird way to tell this story."

In that way, the movie's production could be said to somewhat mirror its own tale. Or as Jonathan put it, "So many Star Wars movies are about literal families. We thought it would be interesting to do a more makeshift family, because it seemed true to Han, that he’s this guy that would sort of piece together this family out of the different people that he met along the way."

For more on Solo: A Star Wars Story and other awesome sci-fi entertainment, pick up a copy of the 300th(!) and latest issue of SFX, out now! Take a sneak peek at it here.