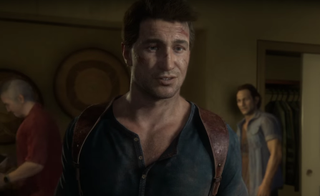 There’s a new Uncharted 4 trailer and while it kicks off with stuff we’ve seen before, it soon shows off some fresh sections full of gameplay hints of what we can expect.

First up, here’s the trailer:

Now, let's take a look at all the bits that flew past quite quickly, starting with...

This is the most exciting thing in the whole trailer: a ships’ graveyard of some sort. There’s huge potential for climbing and exploring here - that ship at the back looks to be upside down for example There’s no way of telling yet where that explosion’s coming from but this is clearly a big set piece and location.

This is a new bit that has ‘puzzle’ written all over it. We know from a recently leaked list of Uncharted 4 levels that there’s a section called ‘Cit tower basement puzzle’ which is a part of the level we’ve seen where Sully and Nat drive though the streets to escape bad guys. Not only is this puzzle the same stonework as the town, but Nate and Sully are wearing the same outfits from that section.

We’ve seen the boats before but this clearly shows them being used in a set piece, rather than just to pootle around the coast. Firstly it’s all stormy and dramatic, then there’s the bad guy hiding up top right with a gun, and, finally, Sam at the back presumably taking pot shots during the chase. Note the damage to the top as well, clearly this thing is taking a beating.

The posh car and equally posh gate it smashes through here suggests this is how Nate and co escape from the black suit and tie thing we’ve previously seen them at. It’s where they appear to meet main bad guys, Rafe and Nadine, and we know it all ends in a shoot out. The leaked level list mentions an ‘auction’ so it’s likely that this is where all the main characters meet up, looking the artefact that brings them all together.

A fight in pirate town

This is a little unclear so you’ll have to trust me that it’s Nathan under second-in-command villain Nadine, tumbling into what looks a lot like the abandoned town we’ve previously seen Nate and Sam arrive at. It seems likely that the mossy, overgrown wooden buildings seen in both are the lost and forgotton pirate haven established by the treasure hoarding Every.

The APC of doom

We’ve already seen Nate being hounded by an APC in a motorcycle sequence with Sam. Either this is another one, or it's a precursor to that story beat because there’s not much left of it at the end of the other chase.

Those were the main bits I noticed, let me know if you've seen anything else and I'll guess we'll find out the rest on May 10th when the game finally comes out.

Seen something newsworthy?  Tell us!