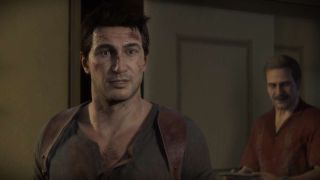 A recent GDC presentation called ‘Technical Art of Uncharted 4’ might have accidently outlined the entire game during a flick through some debug menus. Obviously spoilers if you continue, so I’m going to embed the video here as a warning. The rest of the info will appear below. You have been warned.

Naughty Dog's Andrew Maximov showed off various elements of the game, like car destruction, during which he switched between a few menus. This list below only appeared for a few seconds as he moved between options but it seems to show every level in the game. Or at least the internal studio names for them.

So that’s 20 levels, which sounds substantial already. Then there’s also this screen which shows the breakdown of the ‘City’ level into some 50 smaller beats across about eight main sections. They include things like Basement Puzzle, Market Fight and Chase.

There’s plenty to infer from the list, even if they aren’t final names. There’s two mentions of ‘Prison’. Presumably one of them will be a flashback to when Nathan escaped, leaving Sam behind. ‘Scotland’ confirms where that Celtic cross was located in the last trailer. This one:

The ‘Orphanage’ obviously means we’ll see some Young Nate action in a full level. We’d seen the Kid Drakes in trailer form but this seems to confirm them as playable. The Boat Intro, Dive and Open Water suggest we’ll be spending quite some time at sea. Again, we’d already seen a ship in the trailers, now we know how much of a workout it’s getting. I’m guessing Auction is the swanky do we see Nate suited up to meet villains Rafe and Nadine and the rest could be anything.