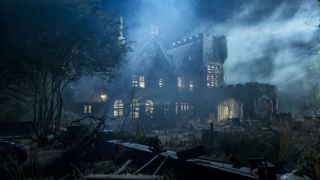 While we all impatiently await the second season of The Haunting of Hill House, the show’s creator has gone ahead and begun developing another horror project for Netflix.

Mike Flanagan, who also adapted Stephen King's novel Gerald's Game for the streaming service, will act as an executive producer on a new, seven-episode series. Titled Midnight Mass, the story will revolve around an “isolated island community” who experience “miraculous events and frightening omens” after a mysterious young priest joins them, according to Netflix.

Unlike The Haunting of Hill House, which was based on Shirley Jackson’s novel of the same name, the series appears to be completely original.

Flanagan – who will work with producing partner Trevor Macy on the project – has seemingly been planning the series for some time. After noting on Twitter that the project is “very special to me”, the director pointed out that the name Midnight Mass has appeared in two of his previous films, including 2016’s Hush.

Before Midnight Mass reaches Netflix, the sequel to The Haunting of Hill House, titled The Haunting of Bly Manor, will touch down in 2020. The series is an adaptation of The Turn of the Screw, a ghost story by Henry James which centres on a governess who moves to the titular Bly Manor to take care of her niece and nephew - Miles and Flora - after their parents died. Things get strange when the governess believes she can see the ghosts of the previous governor and governess floating around the house.

Flanagan has also directed Doctor Sleep, the forthcoming sequel to Stanley Kubrick’s horror classic The Shining. A trailer for the film, which stars Ewan McGregor as the now grown up Danny Torrance, was released earlier this year and features several recreations of scenes from Kubrick’s masterpiece. Doctor Sleep lands in UK cinemas 30 October and US theatres 8 November.

For now, why not check out the biggest questions we had after watching the Haunting of Hill House ending?