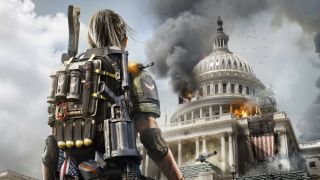 Steam has long been a monolith of the PC gaming marketplace, but the Epic Games Store is making moves to shake up its near-monopoly - and now it's got another sizable exclusive under its belt. Epic and Ubisoft have joined forces to bring Tom Clancy's The Division 2 to the Epic Games Store and the first-party Ubisoft Store, foregoing Steam entirely. This could also be a sign for Ubisoft game exclusivity to come: "Ubisoft and Epic Games store will also partner on additional select titles to be announced during the coming year," says the official press release.

The Epic Games Store is still relatively new, but already it's gaining steam (sorry) in the war on Valve's prominent storefront. To entice publishers into partnering, Epic only takes 12% of a game sale, as opposed to Steam's 30% revenue split (though Valve is making somewhat controversial adjustments to that figure). Just as Destiny 2 ignored Steam in favor of Activision Blizzard's own Battle.net, the shared-world shooting and looting of The Division 2 is willing to cut out the Steam audience, showing a lot of faith in Epic's upstart marketplace. As PC Gamer spotted, The Division 2 was previously listed on Steam, but its product page has been purged.

This is the latest in a string of exclusives and offers that the Epic Games Store has snagged to help turn the tides in its favor. At the tail end of 2018, Epic gave away free copies of the excellent underwater survival game Subnautica (for a limited time, sadly), got the exclusive early access release of Hades from Bastion and Pyre developer Supergiant Games, and will be the only place to buy The Walking Dead: The Final Season on PC going forward. Meanwhile, Steam has done... basically nothing to fight back, with Valve seemingly content to do what it's always done: sit back and see how the forces of capitalism sort themselves out.

Granted, The Division 2 does face some risks by going all-in on the Epic Games Store. The first game had strong launch sales on Steam, and continues to enjoy a steady stream of daily Steam players. Storefront exclusivity can also backfire, as CD Projekt discovered when the excellent card game Thronebreaker: The Witcher Tales saw disappointing launch sales and eventually made its way to Steam after its original status as a GOG exclusive.

We'll have to wait and see how this all shakes out when The Division 2 launches on PC, PS4, and Xbox One on March 15, but this is already an impressive AAA-sized feather in the Epic Games Store's cap. If Epic can leverage that sweet, sweet Fortnite money into more heavy-hitting exclusives, we may start to see Steam sweat.

Tom Clancy's The Division 2 is already among our most anticipated new games of 2019.