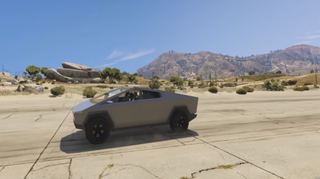 Remember when we all saw Elon Musk's Cybertruck for the first time and reckoned it would look right at home in a video game? At the time, it looked like we would have to wait until Cyberpunk 2077 released next year for a (potential) guest appearance from Musk's latest invention, but I have good news, C.T. fans – Cybertruck might be coming to a game near you sooner than you think.

It's only been a week, but already there's a petition to add the truck to Rocket League, with fans insisting "the one and only" Musk himself can make it happen "for the memes".

If you're looking to cause a little more destruction with your truck, though, jump into GTA 5 on PC before long and you might find yourself being mowed down by a very familiar, low-polygon vehicle, as shown off by YouTuber Fred Walkthrough (thanks, Eurogamer).

Right now there's no news on when we'll see these mods out in the wild but this teaser shows off an early prototype… even though, as one viewer pointed out, "it looks like it’s still loading in the model of it".

YouTuber Elite Rejects has also teased an unreleased Cybertruck mod, but as well as the default metallic-silver version, this video features a fancy red variant, too. Ooh la la!

If you want to make a great game even better, then adding in some of the best GTA 5 PC mods can completely change your experience. The GTA community have proved their creative mettle time and time again, encompassing everything from strapping on a superhero suit to switching sides and joining the cops. There are also visual mods which enhance the game to almost photorealistic proportions or convert Los Santos into a futuristic Cyberpunk setting. Talking of which...

Kicking off the Cybertruck video game memes last week was CD Projekt Red, which replied to Musk' reveal tweet by stating: "We had a deal, Elon". In response, Musk replied: "See ya in 2077 ;)". So if Elon Musk's Cybertruck pops up in Cyberpunk 2077, this is why, okay?

Looking for cyber deals to go with that Cybertruck? Here's our pick of the best Cyber Monday game deals we've spotted so far...