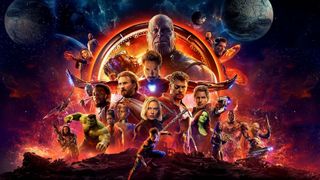 Avengers: Infinity War, the last time I checked, has roughly a billion characters. Squeezing them in isn’t exactly an enviable task, but it’s one that falls on the shoulders of directors Anthony and Joe Russo. Who gets priority? Who only has a handful of lines? Well, we now have a better idea about one of those questions – and it could give us a glimpse into how the movie plays out…

During an interview with Fandango, the Russo Brothers revealed that certain characters would be getting the lion’s share of screen time. First up and – this is hardly a surprise – is the Mad Titan, Thanos. But not for the reason you might be expecting. The directors are all about shaking things up…

“We wanted to tell a story that they [the audience] weren't expecting, and the story is told from the point of view of a villain, which I think is also really unique and risky for a commercial film that will surprise the audience,” says Joe Russo.

That’s one. Who’s the other? Thanos may have an “incredible amount of screen time,” but it sounds like it’s going to matched by an Avenger who has taken a backseat during other superhero smash-ups: the God of Thunder, Thor.

“I think you'll find that Thor has a really interesting arc in the film,” teases Joe Russo. “He hasn't been at the forefront of other Avengers movies, but he certainly has a very important role in this film.”

That’s all but confirmed Thanos’ quest for the Infinity Stones will be at the heart of the movie’s story. Thor’s narrative arc is very much up in the air, but it wouldn’t be surprising to see him hot on the heels of Thanos because, as we’ve seen in Avengers: Age of Ultron, he’s the one on the tail of the galactic despot. He may have lost an eye and his hammer, but Thor is definitely not going to lose in the screen time stakes, that’s for sure.

If we’re following Thanos for large parts of the movie, it might be time to brush up on his plan: read the definitive guide to Marvel’s Infinity Stones.