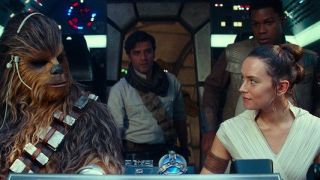 Over a month after its release and we’re still finding out more hidden details about Star Wars: The Rise of Skywalker.

Lucasfilm has confirmed that the final, thousands-strong Resistance armada on the Sith planet of Exegol includes a crossover with another Star Wars property. Even those trained in the ways of the Force would have done well to spot this deep cut.

Those who have been following the Star Wars Resistance animated series will know the show runs concurrently to the events of the sequel trilogy, with a handful of the mainline Star Wars cast – including Anthony Daniels as C-3PO and Oscar Isaac’s Poe Dameron – cropping up from time to time. It should come as no surprise, then, to learn that a handful of characters turned up to help lead the fightback against the First Order.

“One thing we do know is that among the 14,000 ships that arrive with Lando Calrissian over Exegol in Star Wars: The Rise of Skywalker are the Fireball, Jarek Yeager’s racer, and Torra Doza’s ship,” Lucasfilm Story Group member Pablo Hidalgo told the official Star Wars site.

So, while they’re not named (or shown), Yeager, Doza, and presumably the Fireball's Kazuda Xiono all made the jump from animation to live-action in a true celebration of Star Wars ships past and present. That includes Millennium Falcon, the U-Wing from Rogue One, and several crafts from Star Wars: Rebels.

That’s not the only big moment that you may have missed from The Rise of Skywalker’s climactic tussle. Nien Nunb is also thought to have perished during the battle – a claim later refuted by his actor.

For more from Episode 9, check out all the major Star Wars: The Rise of Skywalker Easter eggs and references you may have missed.