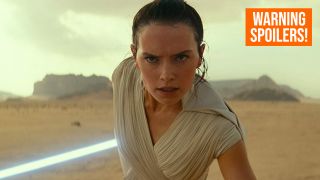 Star Wars: The Rise of Skywalker has finally reached cinemas, bringing an end to the Skywalker saga once and for all. That's 40 years of storytelling in a galaxy far, far away completed, and, as you would expect, there were dozens upon dozens of references to what came before. Below, we're going to dive into all the Star Wars: The Rise of Skywalker Easter eggs and references. But before then...

SPOILER WARNING! Do not read on unless you have seen Star Wars: The Rise of Skywalker. We are going into major spoiler territory.

Still here? Then you have witnessed the ending of the trilogy of trilogies. Star Was: The Rise of Skywalker is crammed full of references to past films, including the prequel and original trilogy. These are the best of them.

On Pasaana, C-3PO mentions that the Burning Man-style festival that the gang is caught up in is held every 42 years. What happened 42 years before the release of Star Wars: The Rise of Skywalker? A certain movie called Star Wars was released. A brilliant little nod.

The very first scene takes place on a familiar planet. Those people Kylo Ren is tearing apart with his lightsaber are actually Vader Cultists who live on the Mustafar, where Vader's tower – seen in Rogue One – resides. This has been confirmed by the Rise of Skywalker visual dictionary. The planet looks different due to it healing.

There's a tonne of subtext to be read into here: Kylo would never have killed Vader Cultists in Force Awakens, yet the character's evolution – killing the past – has led him to ripping through his own grandfather's legacy, even initially wanting to kill Vader's master, Palpatine. It's only when the Emperor promises to give Kylo a legion of Star Destroyers that the Skywalker regresses back to his former self, and even puts his infamous helmet back together.

“I’ve got a bad feeling about this”

It’s a line uttered in some form or another in every Star Wars film (even The Last Jedi, where it's said by BB-8). In Rise of Skywalker, Lando gets to do the honours, telling Finn, Rey, and Poe that things aren’t looking too rosy while they’re being tailed by the First/Final Order on Pasaana.

The Rise of Skywalker's ending mirrors the final moments of Return of the Jedi, with a large celebration taking place after the Resistance defeat the Final Order and Sith forces. The celebration mimics what we see in George Lucas's special edition cut of Return of the Jedi, as we see other planets partying, including both the Cloud City of Bespin and that famous moon of Endor.

"The dead speak!" That's how the opening crawl begins. What's interesting is how the crawl goes on to explain that Palpatine has relayed a message to his followers, therefore informing the galaxy – and Kylo Ren – that he's alive and looking for revenge. We never hear the transmission in Star Wars: The Rise of Skywalker – instead, the honour of featuring the transmission belongs to... Fortnite!

Yes, in the video game Fortnite, players were treated to Ian McDiarmid delivering the dastardly Sith Lord's broadcast. "At last the work of generations is complete", Palpatine says. "The great error is corrected. The day of victory is at hand. The day of revenge. The day of the Sith!"

As the Resistance prepares for one last attack on the Final Order, a very fishy looking guy speaks out. Admiral Ackbar, of course, died during The Last Jedi. This character is actually his son, who was first seen in Star Wars: Allegiance. The character is voiced by The Rise of Skywalker scriptwriter Chris Terrio.

Dennis Lawson's Wedge Antilles flies into battle of Exogel, having been rallied by Lando. The fact that this fan-favourite character is still taking down ships much bigger than his own makes us want to raise a glass of blue milk to him.

The Millennium Falcon's original radar dish is back

Having been removed from the Falcon during the Battle of Endor in Return of the Jedi, Solo had to replace the ship's radar dish with a square model. After that was destroyed in the Battle of Crait in The Last Jedi, the Falcon has its original round dish back in Star Wars: The Rise of Skywalker. Finally!

Luke’s X-Wing rising from the water

In the final third of the movie, Rey finds herself stranded on Ahch-To. To help get her to her fateful face-off with the Emperor on Exogel, Force ghost Luke helps bring his old submerged X-Wing out of the watery depths and onto dry land. Yoda once had to do the same thing for Luke, back in the Empire Strikes Back.

While on board the Falcon, Finn and Poe play Chewie at a game of Dejarik, that chess-like game we've seen countless times throughout the films.

“The Dark Side is a path to many abilities some consider unnatural” is a line from the legend of Darth Plagueis the Wise, a story Palpatine tells Anakin in The Revenge of the Sith. It’s a tale about a Sith Lord who's able to bring people back from the dead, and Palpatine uses it to seduce Anakin to the Dark Side to avert his visions of Padme dying. Rise of Skywalker features Force healing, used by both Rey and Kylo, who both use a mixture of the Dark and Light side.

When Kylo reaches Exogel for the first time, we learn that Snoke was just a puppet for The Emperor to pull strings over. We also hear two voices in Kylo's head: Snoke and Vader – a nice nod to how Kylo has been manipulated by Palpatine all this time, just as his grandfather was.

Ships from The Clone Wars

During the battle over Exegol, dozens of ships come to Poe's rescue. They includ *deep breath* The Ghost, modified VCX-100 light freighter seen in Star Wars Rebels, The Crucible (belonging to Clone Wars' Hondo Ohnaka), Shadow Caster (bounty hunter Ketsu Onyo), The Eravana (the ship abandoned by Han in Force Awakens), The Outrider (which featured in the special edition of A New Hope), The Colossus (from Star Wars Resistance), and many more.

In the background of the scene where Babu Frik alters C-3PO's memory, we see a familiar droid – one of the "Roger roger" ones from the prequels. One of the few callbacks to those movies in Rise of Skywalker.

During a First Order boardroom meeting with all the heads of divisions, Kylo loses his patience and Force chokes someone. We have, of course, seen Kylo's grandfather, Darth Vader, do exactly that before. However, Kylo goes slightly overboard and shoves the First Order admiral onto the ceiling. Ouch.

The Last Jedi's cutest characters get a very brief cameo during the second half of the movie, when Rey exiles herself on Ahch-To. As she burns the ship she used to fly herself there, two Porgs can be seen watching on in worry. Fortunately, Chewbacca isn't around to menace them this time.

Just before being frozen in carbonite, Han Solo once replied "I know" to Leia after she exclaimed, “I love you”. In Star Wars: The Rise of Skywalker, we see Han once again use the iconic line, but this time to his son, Ben, when he appears to him.

The Death Star is back… again! But don’t worry, the planet-destroying weapon is reserved for the Emperor’s hundred-strong fleet of Star Destroyers. The second Empire genocide machine is submerged on Endor – and it’s hiding the Sith Wayfinder Rey needs to find Palpatine. She even walks around the old Throne Room where once, many moons ago, Luke Skywalker and Darth Vader defeated the Empire.

Fun fact: the Emperor's new throne is based on artwork from Star Wars artist Ralph McQuarrie, who made the original sketches over 30 years ago.

Chewie gets a medal

People often bring up the fact that in A New Hope only Han and Luke got a medal for destroying the Death Star, while Chewie got zip. The end of The Rise of Skywalker rectifies that with the wookie finally getting what looks like an identical reward to Han and Luke’s.

One of the sticking points for some fans in The Last Jedi was that Holdo uses hyperspace to crash through a fleet of First Order ships. Why, some people argued, can't they just all do suicide missions to save the galaxy? The Rise of Skywalker has a throwaway answer: "That was one in a million." Fans, you asked for this...

At the very end of The Rise of Skywalker, Rey returns to the place where the whole saga began: on Tatooine. She places Luke and Leia's lightsabers down, buries them, and then their Force ghosts appear to her. Two suns also appear in the background. It's a nice, if slightly predictable, nod to the beginning of the Skywalker saga.

As Rey lies on the floor, having been beaten by the Emperor, she reaches out to the Jedi to be with her. As the camera zooms into space, we hear voices. Here's a list of every Jedi voice we hear, plus what they say.

– Obi-Wan Kenobi (both Ewan McGregor and Alec Guinness): "These are your final steps, Rey. Rise and take them... Rey... Rise."

– Kanan Jarrus, from Rebels TV series: "Rey... In the heart of a Jedi lies their strength."

– Luminara Unduli, seen in Attack of the Clones and Revenge of the Sith, speaking role in Clone Wars TV series: "The light. Find the light, Rey."

– Aayla Secura, seen in Revenge of the Sith, main role in The Clone Wars: "Let it guide you."

– Mace Windu: "Feel the Force flowing through you, Rey."

– Luke Skywalker: "Rey, the Force will be with you. Always."